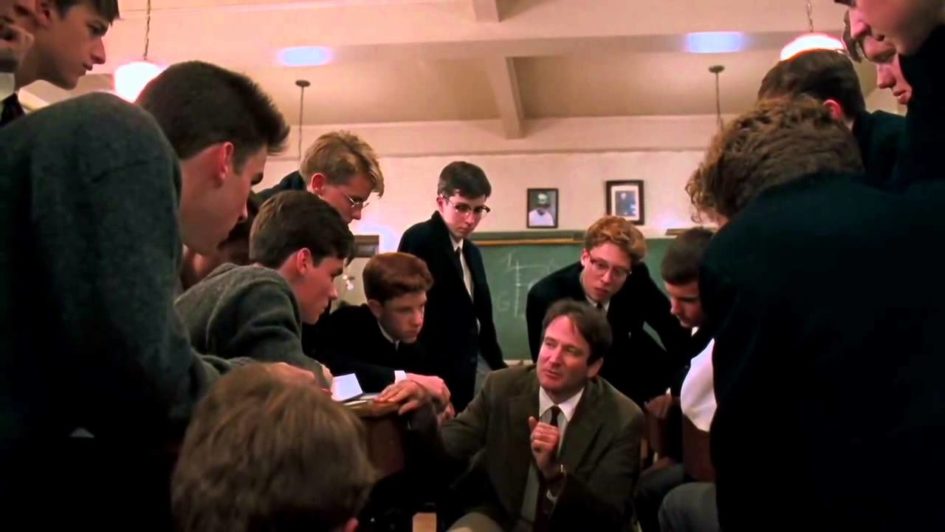 “No matter what anybody tells you, words and ideas can change the world.”

I have always been a fan of conversations. Deep, profound, and poignant conversations about life have always intrigued me. In my opinion, a good conversation with the right person can heal almost anything. Unfortunately, when we get nostalgic about our past, we often remember the incidents, the moments of felicity, the moments of sorrow, the moments which become defining points in our life. Little do we realize or cherish those beautiful banters, those thought-provoking or motivating talks which were significant in making those moments indelible.

This is completely analogous to what happens in movies and T.V shows. When we remember a movie or a particular scene for its brilliance, what we don’t immediately notice is the monologue or the dialogue involved in that scene that makes it so spectacular and memorable.

There is a very popular quote on the internet which goes like, ” I have an obsession with quotes because other people are so much better at putting my feelings into words than I am.” Those other people are not only efficient and competent in putting your thoughts into words, but also at knowing that the readers or viewers would resonate with it to such a great extent.

Which brings me to the underappreciated geniuses of the film world, the dialogue writers.  The most popular and inspiring films like Dead Poets Society, Fight Club, The Dark Night, The Pursuit of Happiness, Into The Wild, The Usual Suspects, Titanic, The Shawshank Redemption etc. have such profound and thought-provoking dialogues and monologues that, now, they have become popular perspectives, opinions, and ideas of people.

I recently completed watching House Of Cards and was in complete awe of its earnest writing. It is a show which has built a reputation solely because of its powerful conversations, arguments, and debates. Other shows too, like Game Of Thrones, Suits, Breaking Bad, and Sherlock have scenes which are celebrated and loved globally owing to the mind-blowing dialogues between their respective characters.

It amazes me when I contemplate about the effort, time, and thinking that went in while writing these dialogues. I can’t help but wonder how these writers can be so good and efficient with words, how they can always create something so innovative and peculiar which often becomes the genesis of the character’s identity.

Then I realize, it’s the ideas, the expressions, the feelings, which, when put into words create something so magical. In today’s world, technology is making most of the human efforts redundant. What I fear the most is the art of speaking, the art to build a conversation, the art to woo people with words be replaced with something which lacks the human effort.

Evolution of the Entertainment industry in this decade: Studies suggest that until the late 90s, 15% Americans had been on the Television with a negligible percent of cord-cutters, with an average television usage of 7 hours and 50 minutes, 83%... END_OF_DOCUMENT_TOKEN_TO_BE_REPLACED

*Research and studies have shown us that time fly faster when we are learning something new. .As we take a step back and think, we notice that as we grow older the time around us starts moving faster than ever.... END_OF_DOCUMENT_TOKEN_TO_BE_REPLACED

The sky is different today, But strangely familiar. It had hung in there throughout the seasons, The past twelve months had passed in a little longer than a blink of an eye.   Now it has a different story to... END_OF_DOCUMENT_TOKEN_TO_BE_REPLACED

The year is 2010:  The beginning of a new decade and a fresh start. While most of us were enjoying the age of innocence, we were most certainly unaware of the uprising revolutions and changes surrounding our nation and all... END_OF_DOCUMENT_TOKEN_TO_BE_REPLACED

“If only our eyes saw souls instead of bodies, how very different our ideals of beauty would be.” ~ Anonymous   “I wish I had a body like her….” “I wish my arms were like his…..” There are so many... END_OF_DOCUMENT_TOKEN_TO_BE_REPLACED