I get to play football every day at my college. The bell strikes at 4:15 and we whisper to ourselves it’s “GAME TIME”. We get ready by wearing the colorful kits and then we anxiously get to wear our cleats. We imagine ourselves as the incarnations of our favorite players and enter into the battle field with a Do-or-Die spirit. 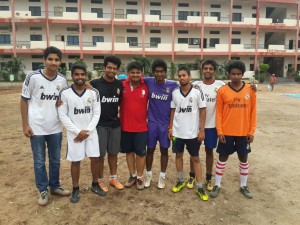 The teams are then formed and the match would begin. As an attacking midfielder, I play an important part in the play making. “Orchestrating the Attack” has always been my motto. By that I mean I always try to anticipate as much as possible and work out every move in such a way that the opposition cannot predict an onslaught.

As the referee walks with long strides, the players get drained of energy .But the thirst for victory from both the counterparts remains. The greatest of the shots are saved by the equally matched efforts from the goalkeeper. The player scoring the equalizing goal is considered a savior. 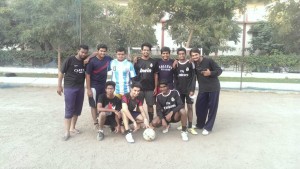 Football is and has always been an indispensable part of my life, infact it makes my life complete.

Aren't all of us artists trying to express ourselves in this world? In my opinion, art is a form of expressing an emotion. Learning how to express our subconscious emotions and communicate with them will take time but what is... END_OF_DOCUMENT_TOKEN_TO_BE_REPLACED

Each person does see the world in a different way. There is not a single, unifying, objective truth. We're all limited by our perspective. - Siri Hustvedt Perspective. It is a beautiful thing in a way that, all of us... END_OF_DOCUMENT_TOKEN_TO_BE_REPLACED

Police sirens, an opened door, a step out of the flat that had been an abode and a prison for 6-years-9 months-23 days—freedom at last?   Julian Assange was under no such false impression as the British police dragged him... END_OF_DOCUMENT_TOKEN_TO_BE_REPLACED

Well, well, well. Something interesting has finally caught your attention in this painfully boring and monotonous life. You dash to the most convenient online marketplace to find the materialistic item that fuels your dopamine rush. These platforms help connect buyers... END_OF_DOCUMENT_TOKEN_TO_BE_REPLACED

Growing up watching Sci-fi movies, I always imagined myself living in a fully automated world with all these cool tech devices- flying sneakers, teleportation units, and whatnot. Something as dreamy as the “first cognitive city” proposed to be built in... END_OF_DOCUMENT_TOKEN_TO_BE_REPLACED