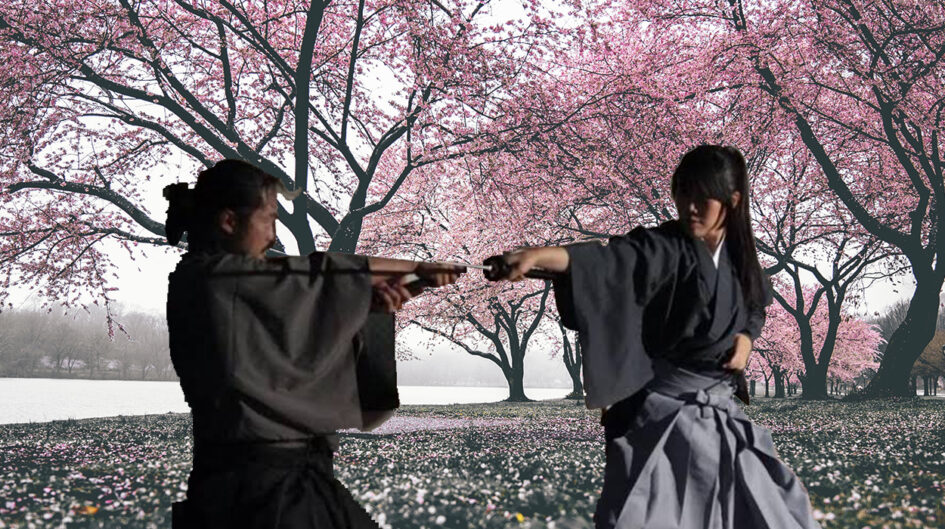 I have to find him. He couldn’t have gone that far, could he? Saya thought to herself as she searched for Chihaya. Of course, there was a slight problem. Chihaya was one of the three immortals that currently walked on earth. He could run around the entire world and probably wouldn’t tire. Despite her initial surety, she had now begun to question if she’d be able to find him. Think Saya think. Where would an immortal being who was imprisoned for most of his life go for comfort after being betrayed by his friends?

“WE FOUND HIM!!!” Torohiko screamed, in a voice that matched the crow’s body he was stuck in. “He is among the grove of the cherry blossoms!!”

“Chihaya…” Saya trailed off, not knowing what to say.

“Why are you here, Saya?” Chihaya asked, his voice cold.

I came here for you, you idiot. “I am here to bring you back to the army. The forces of the dark are close to victory and we need you, both as a friend and as a warrior” she said, her voice level and practiced.

“It is a trap”, Chihaya replied without as much as looking at her. “My brother and sister are stronger than I am, and they have centuries worth of military experience. If the forces of the dark think they are winning, it is because my sister wants them to believe that they are”.

“That…is probably true”, Saya admitted. “They might be immortals, but we can… beat them”. Chop an immortal’s body into pieces and bury them separately. That will kill them – The news that started everything, that almost killed Chihaya. The rumor that killed- NO! I WILL NOT THINK OF THAT!

“I am sorry, Saya, but I don’t know if I could go back. Even if I did, we won’t win. I can’t defeat my siblings.” Chihaya said, shuddering.

They sat in silence for a long time.

How do I make him see that we can win? As she kept thinking, Lord Ibuki’s words came back to her. “When you work with a sword, you are not just swinging it. You are making it a part of your soul. If you ever find yourself in doubt or turmoil, look to it. It will clear your mind and help you look inside.”

She looked to Chihaya and blurted out “Pick up your sword, we are going to duel.”

Chihaya looked at her as if she was joking. When he realized she wasn’t, he was amused. His mind commanded a faint smile but his facial muscles resisted. Has it been that long since I smiled? Then it clicked. She had been there when Lord Ibuki was speaking about what it means to hold a sword. What I wouldn’t give to stop thinking for a while, he thought to himself. “Let’s do it,” he said.

Saya smiled in return. And suddenly, the realization hit her like a brick. She just challenged an immortal to a duel. All she could think of was how easy it would be to persuade him if she won. So, she had to frame the rules of the duel properly and give herself an advantage.

After a while, she spoke. “We fight with sheathed swords and blunt arrowheads. Three strikes are enough for a person to lose blood and become unconscious. So, these will be the rules. Three non-lethal strikes or one lethal strike, whoever delivers them first wins. Don’t forget to stop before delivering a lethal hit.”

They collected their weapons, walked towards each other, locked eyes, and took a deep breath. Her eyes look so beau- Saya broke his nose in a headbutt in one sweep. Chihaya leaped back in shock, not realizing what had happened. His back hit a tree and just as he opened his eyes an arrow flew towards his heart. He tried to dodge it but it hit the shoulder, and even though the blunt arrow didn’t pierce the skin, he still cringed at the pain. He looked up to see Saya running towards him through the falling pink leaves.

“That’s two non-lethal strikes!” shouted Saya, surprised at how well her ploy worked. One more strike and this duel is mine.

When did she learn to fight? Chihaya thought as he leaped onto a branch. She told me how she always felt like a burden to her people. Always being asked to stay back. Had she been training secretly? He let those thoughts slide and smiled. Right now, he was moving, he was alive. And he had to turn back the tide.

Saya knew that the chances of her victory would go down as the battle drew on. She had to end it quickly. Just one more hit! He’d try to finish the battle in one move. She just had to get him to attack recklessly and grab an opening to land a strike. A plan was starting to fall into place.

Chihaya made sure to keep his distance, to not be taken by surprise again. I have to finish this in one stroke. He looked over to her as she drew yet another arrow, and realized that she was about to run out of those. Let’s see how good you are with the sword.

Saya acted surprised as she tried to reach into her empty quiver. Chihaya immediately leaped to cover the 50 feet between them.

Got him. A sheathed dagger flew straight at him. He was going to lose. His next motions came to him instinctively. He twisted to let his legs touch one of the branches reaching to him and pushed himself with his feet, changing his direction. He immediately fell to the ground behind Saya and pointed his blade at her back.

Saya took a deep breath and spoke. “That was how she died, you know. A blade straight through the back. She was due to deliver in 2 weeks.”

Chihaya shuddered. “I know… I wish I listened to her and protected her. Fear is a powerful thing.”

Saya looked at him as she spoke. “You win this one Chihaya. But… I think I did too. You made me realize how capable I am and how much I wish to protect the ones I love. With or without you.”

“I… realize that I have been running away from things. I don’t feel anything but fear when I do. You made me realize that I am now in a prison of fear. I am coming with you.”

The corporate industry is notoriously famous for having the highest pay grade difference for employees working in the same company at different levels doing the same or similar jobs. This difference attracts several young engineers and management graduates into this... END_OF_DOCUMENT_TOKEN_TO_BE_REPLACED

For the fourth time this week, I woke up at my desk. It wasn’t very comfortable: most of the space was taken up by an assortment of empty Red Bull cans and coffee cups. Clutter never bothered me though, it’s... END_OF_DOCUMENT_TOKEN_TO_BE_REPLACED

“THE SWAT TEAM BURST IN. THERE WAS CURTIS GREEN COVERED IN COCAINE AND FLANKED BY TWO CHIHUAHUAS” ~The Untold Story of Silk Road by WIRED In early 2011, law enforcement agencies were caught with their pants down when drugs began... END_OF_DOCUMENT_TOKEN_TO_BE_REPLACED

“What is it about being blind that it makes you want to walk the dog the whole time?” “When it comes to environment, it's not us but our children and our children's children that will pay for our mistakes, which... END_OF_DOCUMENT_TOKEN_TO_BE_REPLACED

[Trigger Warning] The following reading contains events of death. **This is entirely a work of fiction and no distress was intended for any family/person affected by a natural disaster. “Please Ma!” Arya pleaded. “I made it to my final semester.... END_OF_DOCUMENT_TOKEN_TO_BE_REPLACED