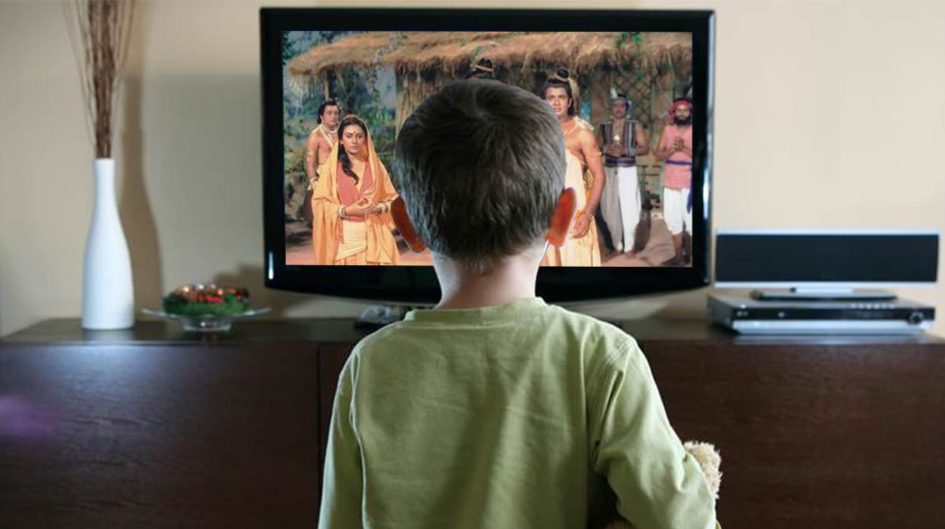 Now, before you prepare yourself to yawn and look down upon this article as an obsolete one, let me remind you that one of these shows has surpassed Game of Thrones’ viewership records. So brace yourself to travel thousands of years into the past, or at least three decades.

The Corona crisis has had a huge impact on the entertainment industry. As soon as the lockdown was announced, people started making their Netflix and Amazon Prime playlists. But the central government had different plans. They decided to rebroadcast Mahabharat and Ramayan, television classics from the 80s. Not sure if they expected it but both the shows received an overwhelming response from the audience. Record-breaking viewership rates might not have been uncommon back then but for a forgotten channel in the Netflix generation; quite a surprise.

What was it that had such an indelible impact on viewers? Most of them already knew the stories right? Let’s delve into some of these insights now.

Ramanand Sagar’s Ramayan was first telecasted in 1987 by Doordarshan. Legend has it that when it first aired, streets across the country were conquered by utter desolation as people were stuck to televisions, although not many houses had one. Yes, a contender for the most recent legend in history.

This show features 78 episodes based on Valmiki’s original edition of the Hindu Epic and the verses of Tulsidas’ Ramcharitmanas. The protagonist Lord Ram was played by Arun Govil alongside Deepika Chikhalia who played Goddess Sita.  Lord Ram’s infallible righteousness, invincible combat abilities, and delightful smile were portrayed authoritatively by Arun Govil. Sita had a sense of fortitude and undying love for Ram. The show instantly made them national stars and Deepika eventually became a Member of Parliament.

While Ramanand Sagar religiously employed extraordinary camerawork blended with captivating screenplay and spellbinding dialogues, the real Brahmastra which took the audience’s breath away was the music.

After a plethora of memes were created on Lakshman (Sunil Lahri), I’d be wrong if I say that this show had no impact on youth at all. Looking at this show from Generation Z’s perspective has a lot of downsides though. The visual effects were absurd and very little effort was made to make scenes look realistic. Some really important combat sequences were interrupted by songs, negating or even nullifying the escalated intensity.

“Rebroadcast of Ramayana on Doordarshan smashes viewership records worldwide, the show becomes most-watched entertainment show in the world with 7.7 crore viewers on the 16th of April.”

This claim sparked a controversy that the record was held by another show and not Ramayan. Regardless, it is still a fact that Ramayan has beaten Game of Thrones’ record, and for a 33-year-old show to do this is no ordinary feat.

For those of you who would run me down for criticizing Ramayan’s visual effects, I’m not just another 21st-century numbskull finding faults with television classics. Here’s the right answer for you.

Right after Ramayan’s success in 1987, Doordarshan set out to telecast yet another epic- The Mahabharat. B.R. Chopra’s Mahabharat is so far the most sought after version of the epic. This show’s 94 episodes cover enough detail for the viewers to understand the intricacies of its complicated storyline.

Owing to the innumerable characters in this epic, the casting of this show is incredibly exemplary. Every role has been ideally portrayed in respect of physical and temperamental characteristics. The narrator Samay (time) gives us an in-depth intuition into the story at the beginning of each episode. The dialogues prove to have a long-lasting impact on viewers, especially the ones during the narration of verses of the Bhagavadgita. The music is effective throughout and we get to hear some striking leitmotifs for major characters.

Given the amazing camerawork and screenplay, the real crowd-pleasers were the avant-garde visual effects. Despite the availability of best-in-class effects, what really stood out was the choice to minimalize their usage. For instance in war sequences, real fire and smoke bombs were used. Moreover, the show had some of the best duel sequences I’ve seen so far. Not kidding. After wondering about the unbelievable closeness to reality of some of the duels for quite a lot of time, I finally know the secret behind it. Most of them were fought really with metal maces and the actors even sustained injuries while shooting. Such dedication to action sequences is something we don’t really see in the majority of today’s entertainment industry. Times have changed drastically to a point where a scar on an actor’s face could mean the end of his career.

People have found divinity, hope, nostalgia, and solace along with recreation in these shows. For the best part, children who normally get into feuds with their parents to get a hold of TV remotes ended up watching these legendary shows with them. Both these epics quintessentially signify the victory of good over evil and to telecast them during the times when we require hope to win against this Corona crisis is undoubtedly the reason for the huge spike in Doordarshan’s viewership rates.

Aren't all of us artists trying to express ourselves in this world? In my opinion, art is a form of expressing an emotion. Learning how to express our subconscious emotions and communicate with them will take time but what is... END_OF_DOCUMENT_TOKEN_TO_BE_REPLACED

The human touch. Such a simple thing, yet one that holds immense power. Almost like a miracle. Wonder why? Read on.  We've been gifted with the five senses, namely: vision, speech, smell, hearing, and the most beautiful of all, touch.... END_OF_DOCUMENT_TOKEN_TO_BE_REPLACED

Well, well, well. Something interesting has finally caught your attention in this painfully boring and monotonous life. You dash to the most convenient online marketplace to find the materialistic item that fuels your dopamine rush. These platforms help connect buyers... END_OF_DOCUMENT_TOKEN_TO_BE_REPLACED

Police sirens, an opened door, a step out of the flat that had been an abode and a prison for 6-years-9 months-23 days—freedom at last?   Julian Assange was under no such false impression as the British police dragged him... END_OF_DOCUMENT_TOKEN_TO_BE_REPLACED

Growing up watching Sci-fi movies, I always imagined myself living in a fully automated world with all these cool tech devices- flying sneakers, teleportation units, and whatnot. Something as dreamy as the “first cognitive city” proposed to be built in... END_OF_DOCUMENT_TOKEN_TO_BE_REPLACED