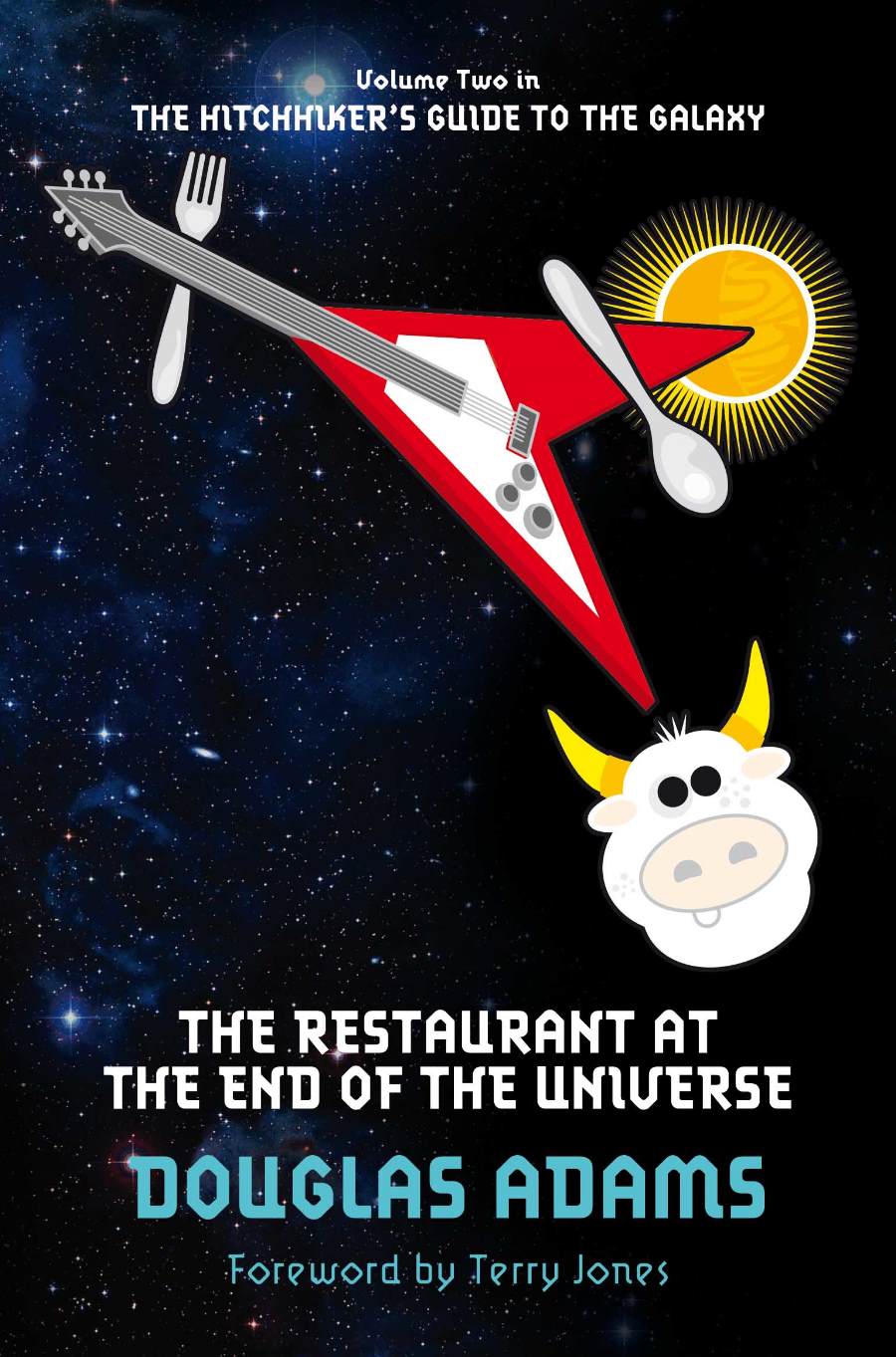 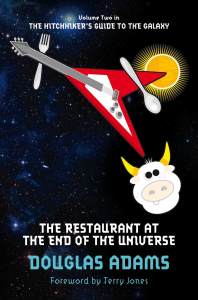 Ever thought about your food preferences and your reasoning behind it? Sound or otherwise?
Whether you are one of the noble green eaters or the proud meat eaters, you will definitely have a different take on food after you read this book, for a talking cow will startle you with some really depressing yet futile (in the case of Arthur) arguments on why it should be eaten or more pathetically, which part of it would give its patrons most gastronomic pleasure.

The Restaurant At The End Of The Universe peaks exactly at the title, i.e. when you reach Milliways.
The amount of thought gone into time travel to make this trip possible is amusingly insightful,more so when he describes the grammar issues that would arise as a result of time travel.

The major problem is simply one of grammar, and the main work to consult in this matter is Dr. Dan Streetmentioner’s Time Traveler’s Handbook of 1001 Tense Formations. It will tell you, for instance, how to describe something that was about to happen to you in the past before you avoided it by time-jumping forward two days in order to avoid it. The event will be described differently according to whether you are talking about it from the standpoint of your own natural time, from a time in the further future, or a time in the further past and is further complicated by the possibility of conducting conversations while you are actually traveling from one time to another with the intention of becoming your own mother or father.

Most readers get as far as the Future Semiconditionally Modified Subinverted Plagal Past Subjunctive Intentional before giving up; and in fact in later editions of the book all pages beyond this point have been left blank to save on printing costs.
-An Excerpt from “The Restaurant at the end of the  Universe”

The thought is simple yet isn’t something people bother themselves with and he takes us down a new path of thinking maybe, shakes you out of your old thinking habits.

Then we have the ideal description for the ruler of the universe,which makes sense after a while because only a truly objective person can make cold and calculative decisions unaffected by any undercurrents emotional or otherwise,without ever having to face the consequences of his decision or even be aware of it.

There is a very clear explanation as to how our (or any)society behaves like a well-evolved ecosystem; more importantly how every profession has evolved and stood the test of time to be almost as important as a species and with all the implications that come along with this train of thought.

His witty and biting comments on society,religion and human behavior will leave you laughing for a while till you realize how deep it goes! The icing on the cake is Marvin ,who has to deal with an army bot, armed with the latest of battle armor, only to defeat him with reasoning and emotionally unsettling the other robot ,given that these robots have genuine people personalities.

Also, there is the total perspective vortex that again brings to light how very insignificant we are in the universe. While reading this book, wherever we may be definitely puts our self-obsession into light. For if we weren’t obsessed with either ourselves or something or someone else, we would listlessly roam the universe for the rest of our biological life spans in soul crushing depression.

Douglas Adams in the course of 170 odd pages takes the reader to a different place in our own psyche and shakes us out of our established thinking patterns. Perhaps, as a result, our imagination works better with every word till we are completely sold on the idea.

"Animation is not the art of drawings that move but the art of movements that are drawn” ~Norman Mclaren. Some things in life don’t change, like the craze we have for animation. Right from adoring our childhood shows to never... END_OF_DOCUMENT_TOKEN_TO_BE_REPLACED

What is common to a mullet-wielding, neon-donning 1980s American teenager and their Persian contemporary living in obscurity, confined in the clutches of Ayatollah Khomeini's reign? Hint: it starts with 'rock' and ends with 'music'. In 1979, at the heels of... END_OF_DOCUMENT_TOKEN_TO_BE_REPLACED

As I take a stroll in the graveyard observing my funeral, I find a few crying and the other meticulously bored by the doings. Yet it feels so light, death actually took away the pain of my congenital disease. But... END_OF_DOCUMENT_TOKEN_TO_BE_REPLACED

[Trigger Warning] The following reading contains potentially distressing information about murders, violence, and brutality in relation to Nazi practices. Reader discretion is advised.   Have you heard of me? Of course, you haven’t. I am neither a Jew who survived... END_OF_DOCUMENT_TOKEN_TO_BE_REPLACED