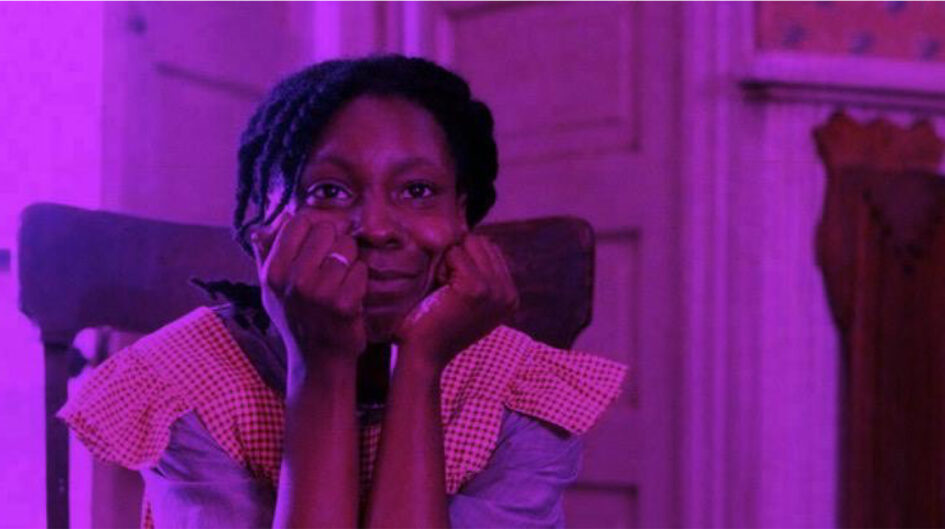 To most, the color purple is just like another color and holds no special significance, other than to be one’s favorite color. It is a simple color resulting in a beautiful blend of red and blue colors. But in reality, the color holds so much more meaning.

In the film The Color Purple, the color is an allusion to the Bible. The first reference to God is in the color purple. The color represents the things that God created to give people pleasure, such as love. At the very beginning of the film, Celie, the protagonist, does not seem to be much aware of anything, let alone the color purple. She gets impregnated by her father at the age of 15 and tries to survive the harsh world she lived in.

However, the irony lies in the title itself. Purple represents wealth and royalty, while Celie in the beginning is nothing close to that. She is a poor Black woman who has been raped, disrespected, and dehumanized throughout her entire life, yet, she accepts her situation and falls prey to it. Towards the end of the film, she finds peace and acceptance and is finally able to acknowledge the “purple” in her life.

The color is representative of several ideas. It is a color suitable for queens like Celie says. It is empowering, illuminating, and speaks of elegance and luxury. It is the color of royalty. The color amalgamates the characteristics of both red and blue and brings out a fine balance between the aggressiveness of Celie with red, and her calmness with blue.

The symbolic representation of the color purple has a huge influence on the characters’ growth throughout the film. It describes pain and strength. This can be seen when Celie sees her daughter in law Sofia, in prison, who is beaten by the police. Her skin is described as being the color of an ‘eggplant’-purple representing the color of a bruise. It signifies black-on-black – perhaps also suggesting the black-heartedness of the whites who impose the beating. The color in this context throws light on the ability to triumph over the hardships in life and come out of oppressive situations undefeated.

Celie says that when she is old, she will wear purple, with a red hat that doesn’t go with her outfit, and doesn’t suit her, expressing her disobedience and rebellious attitude towards the ways she is expected to follow. She foresees her freedom and expects to enjoy the acquired freedom when she grows old by wearing this color.

Celie now has a house of her own and has the liberty to have as many ‘happy looking’ things as she desires. She no longer had to buy any blue or brown things just because those colors pleased her husband. The purple things in her room are reminders of the cruel circumstances she had been through, from being raped by her father to being forcefully married to her husband and being raped by him. Yet, the color also represents all the beauty in her life like her sister’s life, her relationship with Shug Avery- her husband’s former mistress, and her pants business. When Celie paints her room purple, this also shows a mark of ownership. She takes control of her life and happiness. Her room is her comfort zone, her paradise.

The color has some interesting resemblance to the political scenario too. In the ’70s purple became the color of the women’s liberation movement and was chosen as a tribute to the suffragette movement.” ‘The Purple Rain Protest’ was part of the struggle against apartheid. The protest has been tabbed the “Purple Rain Protest” because of its iconic imagery and influential impact. Multiple pieces of anti-apartheid graffiti, “The purple shall govern“, appeared on the streets all over the city. The statement is a wordplay of South Africa’s Freedom Charter declaration that “The people shall govern”. The color here symbolizes freedom, courage, and transformation.”

The numerous representations of the color purple above reflect vital themes and moments of growth in the protagonist’s life. The representations help the characters find their true identity. It is a beautiful portrayal of sensitive parts of the movie with a single color.

This article is inspired by the movie The Color Purple.

"How do you feel about this achievement? Your book is now one of the fastest-selling books!" asked one of the reporters. "I'm happy for this book's success more than any of my other books. Because this book is not a... END_OF_DOCUMENT_TOKEN_TO_BE_REPLACED

What is common to a mullet-wielding, neon-donning 1980s American teenager and their Persian contemporary living in obscurity, confined in the clutches of Ayatollah Khomeini's reign? Hint: it starts with 'rock' and ends with 'music'. In 1979, at the heels of... END_OF_DOCUMENT_TOKEN_TO_BE_REPLACED

Trigger Warning: The following content contains a description of abuse and murder which is potentially disturbing. Readers’ discretion is advised.   Did you know that Adolf Hitler was alleged to have paranoid schizophrenia? Many Psychoanalysts pronounced that he had mental... END_OF_DOCUMENT_TOKEN_TO_BE_REPLACED

Love is unconditional. It's received and given in many forms, but it's said that the truest of love is when it's without any limitations. A love for caring about others without demanding much for yourself. The love of acceptance and... END_OF_DOCUMENT_TOKEN_TO_BE_REPLACED