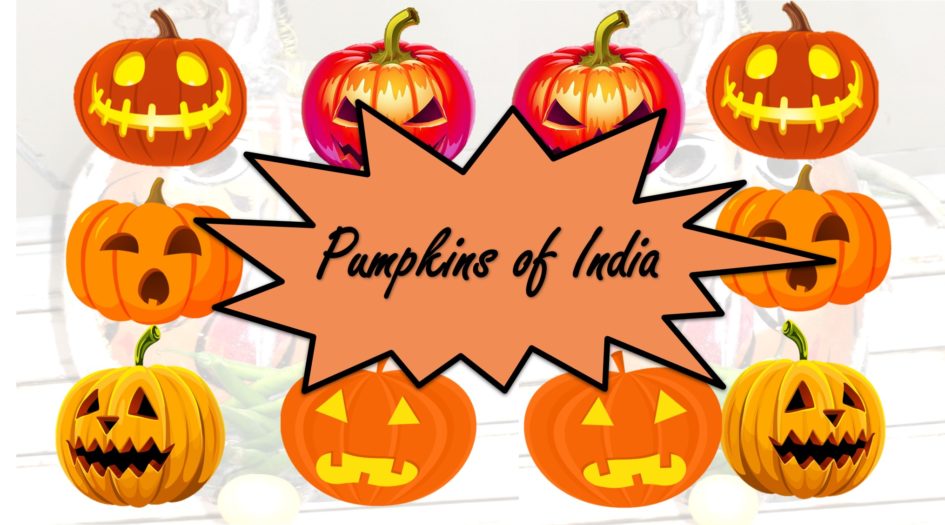 Swoosh! The Fairy Godmother hath cast her spell on a big, round, juicy, orange PUMPKIN!

Put ’em together and what have you got?

From Disney’s Cinderella to Jack-o-Lanterns of Halloween, pumpkins have never failed to amaze us. Ever wondered what’s up with those faces carved on them? Or the numerous pumpkins smeared in ‘red powder’ outside Indian Households, temples or atop doors? Let’s sit in the Pumpkin Coach to find out about this giant squash. 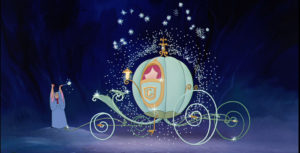 Speaking of the west and hence the infamous Halloween, surprisingly pumpkins weren’t always associated with this festival. Celebrated as the day of the dead, faces were initially carved out of turnips. It was the Irishmen who had first used the pumpkin for the Jack-O-Lantern. And it was only until a few migrants carried the pumpkin seeds to America when the latter started using them for the same. Later, with America no doubt being a superpower, it’s culture found it’s home even in countries seas far away from it.

Ours is one such country. With American brands like Starbucks crawling in like fire ants on the Indian soil and numerous shows bombarding households through Netflix, not even a decade was necessary to mainstream Halloween and its pumpkins. One might praise “how flabbergasting of this festival to bring ‘fun’ to boring squashes”, but only to be smacked on the head by Madras Sambar! (Main ingredient, pumpkin)

Pumpkins aren’t indigenous to India but have had a long history here. From rhymes to cuisines, from rituals to superstitions, we have seen pumpkins in all.

A noteworthy utilization is seen in ascetic water-pots or Kamandalus. From Gods like Brahma and Shiva to rishis and Aghoris, all boast them in hand. Kamandalus are often prepared by hollowing out ripe pumpkins by removing all the seeds and flesh and allowing it to dry. Once dry, they are hard enough to store drinkable holy water. These kamandalus are surprisingly a symbol of BOTH civilization and asceticism. ‘Surprisingly’ because often both are perceived as mutually exclusive. The idea is of ‘storing water’ (civilization) rather than fetching from the river and ruling out the ‘necessity to depend for water on fellow humans’ (asceticism)

“A ripe pumpkin symbolizes a spiritual seeker. The seed of the pumpkin represents the ego, cleaning of the pumpkin shell symbolizes surrendering the ego, and clean water symbolizes self-realization…a Kamandalu from a pumpkin (..equates to..) give up the egoistic desires in order to experience the bliss of the higher self” 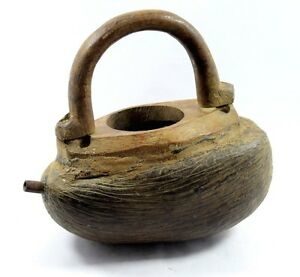 Moving ahead, a pumpkin with a pair of big round eyes, a sharp nose, a twirled mustache, flowing mane and single puffed lip is often seen atop houses and shops. Wonder what that means?

The pumpkin represents the once ever-hungry Lion Kirtimukha who had been created by Lord Shiva to kill a demon, Rahu. But Rahu, in turn, had sought Shiva’s shelter, leaving Kirtimukha still hungry. Hence Shiva suggested him to eat, well, himself. The innocent lion thus proceeded to eat his own body leaving nothing but his upper jaw. Pleased, Shiva gave him the title of ‘the mouth of fame’ (kirti=fame, mukha=mouth)

This pumpkin (Kirtimukha) is believed to act as a magnet of all the evil a person, known or unknown to you, casts on your property. It absorbs (not wards off) the evil thus decaying gradually. The big round eyes ‘look deep into the soul’ of the person though saying “You may hide from the world around but I can see the world inside you.” Better look out for this guy now! 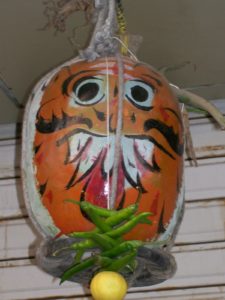 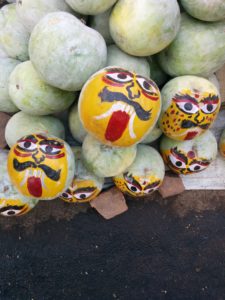 Our orange squash has found another place in this country, but only to be- smashed! This nation has come a long way from the Vedic Period to the 21st century. During my conversation with Ramkrishna Math’s Prasad Maharaj, he had said: “religion has two aspects- ritualism and philosophy….‘rituals and ceremonies’ are one thing that is always subject to time, so they change according to time.” And animal sacrifice was one such example.

Finding its place in the action-part or Karmakhanda of Vedas, the sacrificial offering was a common practice from time immemorial. This was up until the people understood that the sacrifice of the evil inside, is of far more significance than the sacrifice of innocent creatures. And thus the ritual started taking a new form. Animals were replaced with coconuts and pumpkins. [GRAPHIC] the breaking of the upper part of coconut signifies the decapitating of the head from the body. The pumpkin, on the other hand, is carved a little on the top. A Lumpsum quantity of red Kumkum powder is poured in it. And with one stroke, it is smashed on the ground!

[GRAPHIC] The scattering of red kumkum powder resembles the spilling of blood. The pumpkin, now broken into two halves, is quickly bathed in red Kumkum powder again. This powder smeared on the ripe tender wet halves of pumpkin resembles the sacrificed flesh. This substitute is welcomed widespread today in the place of animals. 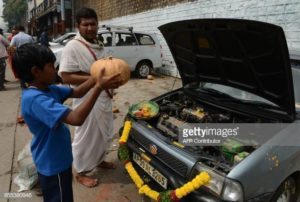 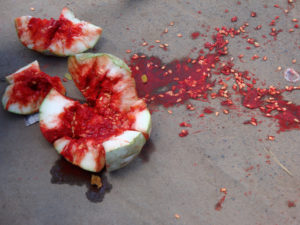 Our pumpkin has found a place in our tummies as well. From gummadikaya-vepudu of the South, bhopla-che-bonda of West, kaddu-ki-kheer in North to kumro-chokka of East, all delicacies celebrate the succulent squash. 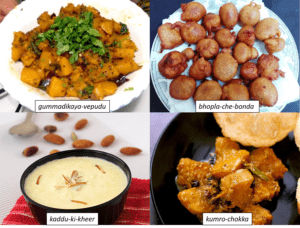 Well, now next time we take a Jack-O-Lantern to carve or order a Pumpkin Spice Latte, know well that, THAT pumpkin is not so simple.

FUN FACT: Maharashtra has a cinderella of its own. A thin fragile nanny fighting bears, tigers, and jackals all the while sitting in a pumpkin gifted by her daughter.

No idea of any old-broad, 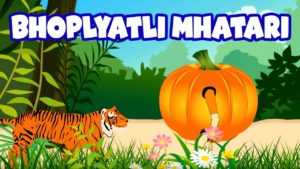 “MSS25 to command central. Timestamp- 0100 command time. MSS25 has been refuelled from Dyson sphere X2684 with zero complications. Asking for permission to initialize pinch from terminal X2684 to terminal U895. Over.” [Ship's communication device] “Command central to MSS25. Timestamp-0100... END_OF_DOCUMENT_TOKEN_TO_BE_REPLACED

It’s the 7th of March, 1936. Under the guidance of Adolf Hitler, the German troops have crossed river Rhine and re-militarized the Eastern border of France. Knowing this is a clear defiance of the Treaty of Versailles, which banned Germany... END_OF_DOCUMENT_TOKEN_TO_BE_REPLACED

Humans lately have evolved, trying to bring about reforms in society and break stereotypes. However, we keep moving in circles when it comes to its impact. It was on 16th September 1987, the Montreal Protocol was signed and we are... END_OF_DOCUMENT_TOKEN_TO_BE_REPLACED

I When I was little, my home had one wall- my grandfather, my thatha. I thought that of all the people who ever breathed, and of all the stars in the sky, he was the oldest ever. My footsteps went... END_OF_DOCUMENT_TOKEN_TO_BE_REPLACED

Trigger Warning: The following reading contains information about racism, brutality, homophobia, and child sexual abuse. Readers' discretion is advised.   During the Black Lives Matter protests, which began as a response to the unfair killing of George Floyd by a... END_OF_DOCUMENT_TOKEN_TO_BE_REPLACED