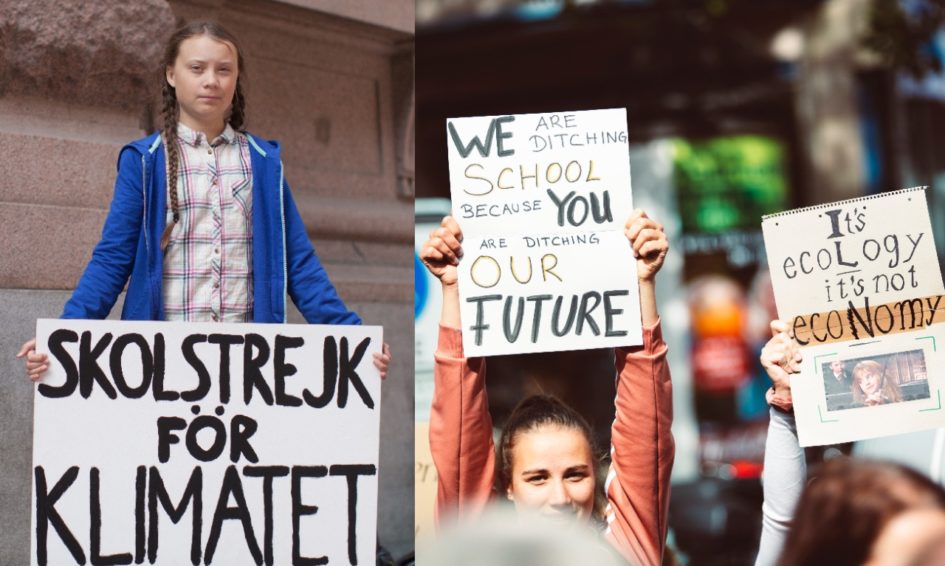 11 years until we can protect the planet from irreversible damage. Only 15 months until we can make a significant difference. The world is dying but little is being done to combat this issue. For the past 30 years, many scientists have warned the world of climate destruction but people have failed to realize the gravity of the situation. But this young 16-year-old girl from Sweden is turning heads from all over the world for her views. From Trump to Putin everyone has something to say about her. Greta Thunberg, a name becoming synonymous with climate activism.

Her interest in the well being of our planet started right from the young age of 8. She was alarmed at how our planet is dying. Despite being born into a privileged family in Sweden she decided to take matters into her own hands to bring about a difference. She started by encouraging her family to become vegan and restrain plane travels to reduce their carbon footprint. At the end of 2018, she decided to skip school every Friday and protest in front of the Swedish parliament holding a sign that read ‘school strike for the climate’.

Receiving a backlash from her family and media did not deter her from doing what was right.

She was diagnosed with Obsessive-Compulsive Disorder(OCD), Asperger’s syndrome and selective mutism which is a condition that hinders speaking ability. Despite this, she spoke at the United Nations Climate Action Summit this year delivering a very strong message for the rest of the world.

According to the United Nations Framework Convention on Climate Change (UNFCCC) 2015 Paris agreement, almost 150 nations came together to cut down the carbon-di-oxide(CO2) emissions by 50% and that ensures only a 50% chance of survival. She didn’t want to take that kind of risk for our planet. So, a suggestion to cut the emissions down to 80% was made.

She heavily criticized world leaders for prioritizing economic growth in countries when the planet was almost dying. They are gambling with millions of lives. This speech went viral on various platforms and she started receiving support from many celebrities and the common folk. With the support came criticism as well. Many were pointing out that she only spoke about the problem and didn’t give any concrete solutions to fix them. The UN received backlash for letting a young girl speak. But by letting her speak, the UN successfully grabbed attention from all over the world. Let it be positive or negative reactions, she helped in the awareness of the issue.

The first step for solving the problem is its awareness. This can be proved in the case of the recent Amazon forest fires. Many around the world didn’t know that massive forest fires have broken out in the Amazon this year. The limited and late coverage of the fire by the media didn’t do any good. A huge portion of the forest got burned and the world was helpless. So the attention Greta is receiving might be mixed but the idea of saving climate has been planted. Even after receiving negative criticism Greta has continued to spread awareness all over the world(by boat) and is inspiring millions of people to stand with her and protest for a cleaner and safer planet. Her obsession with sustainable development and saving our climate dubbed as the ‘Greta effect’ has become a massive phenomenon around the world and it will only continue to grow until the change is imminent.

“Everybody knows they're going to die, but nobody believes it. If we did, we would do things differently”. - Morrie Schwartz Consider a hypothetical situation wherein you know you’re going to die in a few days or months or years.... END_OF_DOCUMENT_TOKEN_TO_BE_REPLACED

Novastella Stardate 1012.45. Over the years, the human race not only managed to save their home but also succeeded in colonizing eight different planets. Advancing technology and their never-ending desire to explore space have resulted in the journey of Novastella.... END_OF_DOCUMENT_TOKEN_TO_BE_REPLACED

The below article identifies as Horror. Reader Discretion is advised.   Tick Tock. Tick Tock.    As the clock struck three, darkness shadowed the light of the moon. Silence crawled through the halls within, and the only sound I would... END_OF_DOCUMENT_TOKEN_TO_BE_REPLACED

Humans lately have evolved, trying to bring about reforms in society and break stereotypes. However, we keep moving in circles when it comes to its impact. It was on 16th September 1987, the Montreal Protocol was signed and we are... END_OF_DOCUMENT_TOKEN_TO_BE_REPLACED

Stories are written by the survivors. But what did they do to survive? How did they survive? And what stories do they have to offer? Now to understand a survivor we need to break them down first. See what they... END_OF_DOCUMENT_TOKEN_TO_BE_REPLACED