LOVE IN THE TIME OF AI 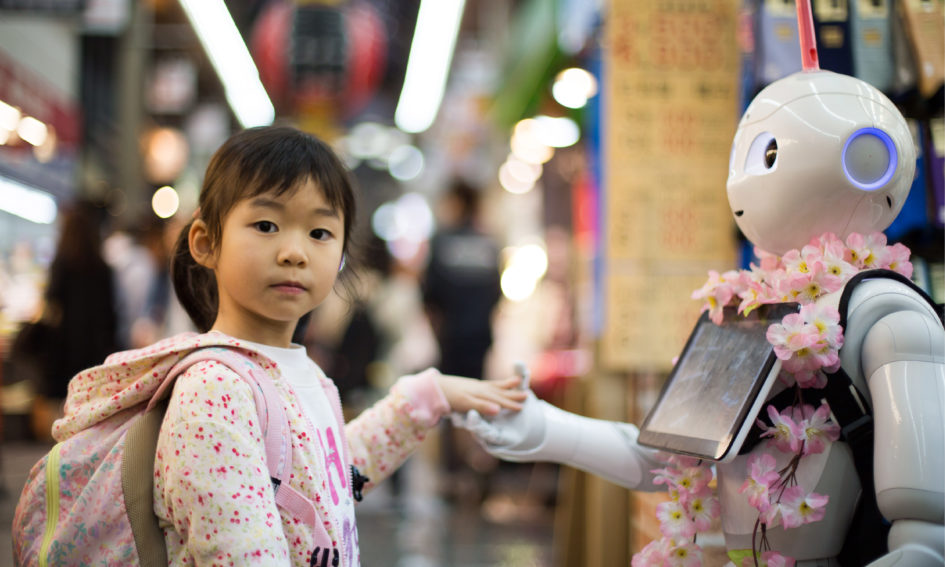 Robots these days are capable of doing things that once only humans could do. So, does that make them as lovable as us humans? Though we are still a far cry from science-fiction, we are already used to interacting with robots. If a robot could be built with apparent human emotions, would you want one? They could be a part of our lives, so we might even fall in love with them.

Today, the idea of someone loving a robot may seem queer, obnoxious or even socially unacceptable. Yet over history, opinions of what is morally acceptable and what isn’t have changed quite drastically. There may be no reason to think as to why our attitude towards loving artificial intelligence would be any different.
Imagine a world where robots with artificial intelligence take the place of humans. Science fiction writers and film-makers have tried to demonstrate such a scenario through their films. A few thought-provoking films like Ex Machina(2015), Her(2013), Robot & Frank(2012) and Big Hero 6(2014) examine worlds where humans have relationships with artificial intelligence – for the better or the worse.

In the movie Robot & Frank(2012), the robot provides companionship to the elderly hero. With a growing elderly population that needs carers, the question isn’t “Man or Machine?” It’s “Nothing or Machine?” according to director Jake Shreier.

Many parents have to work and with growing childcare costs, we could have lovable child-friendly robots designed to watch over our children such as Baymax from the movie Big Hero 6: “You just want to go up to him and touch him and hug him”, says the Director (Big Hero 6, 2014).

On the contrary, our relationship with AI robots may bring up issues. These will include the possibility of deteriorating the quality of life and exploit its meaning and purpose. It could seriously damage human relationships. The whole idea of human emotions and how they link people and bring them together will have no meaning.

Recent studies have found that humans may tend to feel concern for a robot if they think that it is in pain. This indicates that we can also feel empathy towards a mechanical person and not just a biological one. The emotional concern is quite different from romantic love. The idea of humans interacting with robots on a complex emotional level was first tested back in 1966 when MIT Professor Joseph Weizenbaum created a computer program called “Eliza”, who took the role of a psychotherapist. It asked participants therapeutic questions to see how they would respond and interact with the program. People soon began treating Eliza as if it were a living being. Though not as advanced as AI today, it drew out interesting responses. Weizenbaum soon found that the participants were more comfortable revealing intimate details to Eliza than they were to any other person. They perhaps did so knowing that Eliza wouldn’t judge.

Some indications being emotionally connected with a robot is possible. For instance, research shows that people who communicate via email, messenger, on the phone, or through text often feel a more intimate bond than those who chat face-to-face. The pressure is off, might it be with a robot.

For anyone who has found love “complicated” or has wished for a simpler relationship, a robot lover may solve the purpose. A suitable lover based on your own specifications? What is more appealing than your very own custom-made lover? The robot would have to be programmed with certain faults as well since imperfections would make the lover more realistic.

Still, AI is not at the level where it can make appropriate emotional responses. Imagine going on a date with someone who doesn’t have any emotional depth? It is such a turnoff. Another thought to stumble upon is whether or not the robot would love you back. Today, artificial intelligence can recognize human facial expressions and respond to them. This isn’t the robot feeling the emotion itself or responding out of empathy, but merely programming. In human relationships, we may notice that one person may claim to love more than the other or puts more effort. We have no way of instilling emotions and empathy in robots currently, and we don’t know if it will even be possible. A human may be a good emotion-faker, but may, in fact, be incapable of loving you back.

Why love someone who is never on time, ditches you for a football game, forgets your birthday or dislikes your friends when a robot won’t ever? But is the depth of a real human relationship only so much? Would those robot lovers be unable to be attracted to a real person? Would a human-robot relationship be as worthy as a human-human one?

The sky is different today, But strangely familiar. It had hung in there throughout the seasons, The past twelve months had passed in a little longer than a blink of an eye.   Now it has a different story to... END_OF_DOCUMENT_TOKEN_TO_BE_REPLACED

The 2010s- The period of time when our lives were so different in their own ways. Some of us went to school in the first part of the decade and then to college in the second part. It was emotionally... END_OF_DOCUMENT_TOKEN_TO_BE_REPLACED

Evolution of the Entertainment industry in this decade: Studies suggest that until the late 90s, 15% Americans had been on the Television with a negligible percent of cord-cutters, with an average television usage of 7 hours and 50 minutes, 83%... END_OF_DOCUMENT_TOKEN_TO_BE_REPLACED

As the year 2011 rolled in the world population hit 7 billion. Leonardo DiCaprio finally won a well deserved Oscar and for the first time in history, a man married a software. Here is a list of 19 events that... END_OF_DOCUMENT_TOKEN_TO_BE_REPLACED

Climate change is happening now, faster than predicted by scientists. They gave us a deadline of 12 years to keep up the global temperature below 1.5 degrees Celsius or a great catastrophe could strike the earth. Our future generations might... END_OF_DOCUMENT_TOKEN_TO_BE_REPLACED