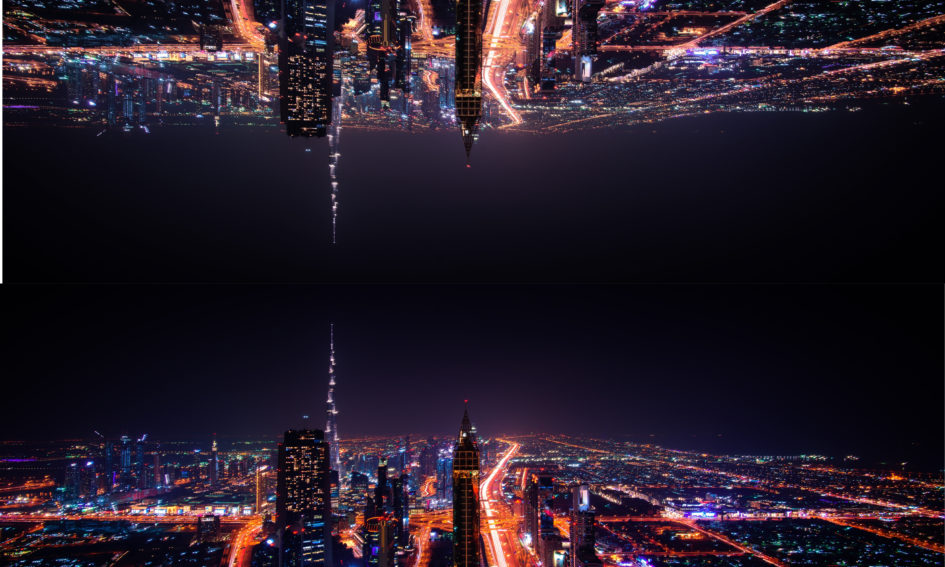 The Big Bang Theory is the leading explanation of how the universe began. Did you know, some scientists believe that when this happened, an alternate universe was created? They believe it is an anti universe, a mirror image of our own, where even time runs backwards. People there find things which are normal to us, weird, and which are weird to us, normal. It may be because they have always experienced things the other way!

Our Universe is infinitely humongous, yet there are theories of the existence of more such universes in the world. There are so many myths and truths that revolve around the science of multiverse. One of which is given below.

According to Hindu mythology, the creator of this universe, Brahma had pleaded Lord Vishnu to come down to Earth to control the despotic dominance of tyrants. That is when Lord Vishnu incarnated as Krishna unbeknownst to all the Lords and Gods. Lord Krishna grew up in the village of Vrindavan from where he amended the world into a happy place. Brahma, who had no clue about Krishna’s true identity, was bewildered by Krishna’s triumph over all the despots. That is when he decided to find who Krishna was. Assuming it to be the mischief of an invincible wizard, he tried to coax him into an unkind prank. One fine day, when Lord Krishna and his friends went to the woods for a picnic, Brahma vanished all of his friends. Krishna, who finds out that it was Brahma who was behind this deed, replicates himself as his friends to avoid disturbing the routine of his village. He kept the parents happy by taking the place of their kids. After a year, when Brahma returned to Vrindavan to see how the villagers were responding to his trickery, he was bewildered on seeing all the kids playing around Vrindavan. Shocked, Brahma goes to Lord Krishna.

However, to his astonishment, he sees thousands of Brahmas flying towards him on swans. Lord Krishna then unfolds the truth of parallel universes by telling Brahma that he is the creator of only this universe. He explains to him that there are many powerful creators and many more enormous universes than his’.

In Hinduism, there is another concept of the 14 lokas or worlds. It states that there are 7 worlds above the plane that humans exist on called Vyarthis and 7 worlds below the plane called Patalas.

There are fictitious ideas saying that parallel universes do exist, exactly like our universe. It is just that their wars might have had different outcomes than the ones we know. Species that are extinct in our universe might have evolved and adapted in others and there, we humans might have gone extinct.

Though this is the fictional side, scientifically, there was a thought experiment that was comprehended by Albert Einstein. It is called the Schrodinger cat experiment where a cat and a pile of unstable gunpowder was kept inside a box. As the name emphasizes, it was carried out by the Austrian physicist Erwin Schrodinger. The probability of gunpowder exploding is equal to the probability of gunpowder doing nothing. According to our viewpoint, when we look into the box, the cat is either dead or alive. The experiment is repeated enough times until the odds of the cat staying alive and losing its life are equal.

This was our interpretation of the cat’s life but when we consider the cat’s perspective, there are two possibilities where the gunpowder explodes and the cat sees it exploding or it doesn’t explode and the cat stays alive. So the cat either survives or dies. This means that if the cat lives, the other possibility of it losing its life is dissolved by nature. Here, it is us who are looking at the cat’s fate of life but, if we look further and imagine ourselves in the cat’s place, there might be someone else observing. There might be different outcomes for every act of ours. So, there can be a chance that all the possibilities are happening in a larger multiverse with many parallel universes, just like how we are seeing the cat live or die every single time we run the experiment. Probably, there is another you who might have chosen to read a different article!

Some people also believe that deja vu (the feeling of having lived through the present moment already) is something experienced by your ‘universal twin’ in a parallel universe that is ahead of time.

A few real-life experiences also amplify the existence of parallel universes. In 2015, the people of China saw a towering city of skyscrapers that appeared in the clouds. Some people believe that a parallel universe opened up for a few minutes while others call it a mirage.

In 1954, there was another man who landed at the Tokyo airport with a genuine passport of a country called Taured. But Taured, according to our world map, doesn’t exist! He had authentic proofs belonging to a bank, hotel and the company he was working in. But neither the hotel nor the bank nor the company have any records of him. The next day, he puzzlingly disappeared from the room he had checked into.

Scientifically, there are not many legitimate proofs to make sure that parallel universes exist. Although there are some mythological stories and some real-life instances, and in the end, it is an individual’s choice to believe in it or not. And as far as my opinion is considered, I choose to believe that parallel universe and parallel lives are true. Who knows, there could be another me in another universe writing another article which I wanted to write before choosing to write about this!

Aren't all of us artists trying to express ourselves in this world? In my opinion, art is a form of expressing an emotion. Learning how to express our subconscious emotions and communicate with them will take time but what is... END_OF_DOCUMENT_TOKEN_TO_BE_REPLACED

[Trigger Warning] The following reading contains events of death. **This is entirely a work of fiction and no distress was intended for any family/person affected by a natural disaster. “Please Ma!” Arya pleaded. “I made it to my final semester.... END_OF_DOCUMENT_TOKEN_TO_BE_REPLACED

The corporate industry is notoriously famous for having the highest pay grade difference for employees working in the same company at different levels doing the same or similar jobs. This difference attracts several young engineers and management graduates into this... END_OF_DOCUMENT_TOKEN_TO_BE_REPLACED

Well, well, well. Something interesting has finally caught your attention in this painfully boring and monotonous life. You dash to the most convenient online marketplace to find the materialistic item that fuels your dopamine rush. These platforms help connect buyers... END_OF_DOCUMENT_TOKEN_TO_BE_REPLACED

Comfort space is personal to every individual. It allows you to be yourself and cherish the moments as they are with no judgment whatsoever. As for me, movies and music do the job. Speaking about movies, I have been exposed... END_OF_DOCUMENT_TOKEN_TO_BE_REPLACED