I was asleep when the news broke to the world that Chester Bennington was no more, and when I came to know about it, I was stunned for a while because the news couldn’t sink in. The same happened to the group of friends that has enjoyed Linkin Park’s music over the years.

Yes, I didn’t know him personally, but, his music was really important to me because of the sort of moments I shared in life with my family and close friends and that I even made a lot of friends because we shared a common music interest.

Like almost every 8 year old, I knew only three rock bands at the time, which were Linkin Park, Blink 182 and Green Day. I’m an ardent fan of Rock and Metal today because Linkin Park introduced me to Rock. I remember, my sister was jamming to ‘In the end’ all the time, and that was the first ever song of theirs that I heard. I remember clearly every bit of it.

The song was airing on MTV and my sister reacted to it saying “Isn’t this an amazing song?”! and she was right on point! For the first time I’d seen rebellion in such a way and damn! the guys looked so damn cool!

I remember I got the ‘Hybrid Theory’ cassette from a music store nearby (also it was the first time I had bought music legally) and went to school and discussed it with friends and discovered that they were into Linkin Park and couple of other bands too, and that formed a cherished bond that lasts till this day, the same group goes to small rock/punk gigs held in the city every now and then. So you see…Linkin Park formed a bridge between 8-9 year olds who didn’t quite know each other that well. Linkin Park got me into a lot of ‘firsts’ and likewise with a few friends of mine.

I remember when I heard ‘Numb’, ‘Bleed it out’ and ‘What I’ve done’ and the sort of vocals that Chester got on the respective albums, I was in awe!

Akash sent me a screenshot of the most played artist on his mobile. 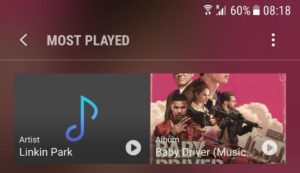 Chester was great at soft vocals and screamo, it’s kind of hard to find someone who can do both. Two examples that come to mind is Billie Joe Armstrong from Green Day and Dave Grohl from Foo Fighters, two legends.

I remember back in 7th grade when a friend of mine bought the album ‘Minutes to Midnight’ and a bunch of us went to his place to do a full-length listening of the album, after about an hour or so of sitting quietly, we were jotting down the songs we liked and then we just played the ones we liked and jumped around like crazy doing random air-guitar and air-drumming, acting like we were Linkin Park.

There was even a time when we moved on from Linkin Park and found a liking for other bands, didn’t like Linkin Park anymore, but when they released the album ‘A Thousand Suns’, we loved the album so damn much that months later when we were at a party we realised that they had the Karaoke on, and we were flipping through songs and they were good songs but not the ones we’d like to sing to, suddenly we find that ‘Iridescent’ was on this list and after a little search we found songs from ‘Meteora’,‘Hybrid Theory’ and ‘A thousand Suns’, songs from Guns N Roses and other bands and…that was it! We sang from soft songs to screamo to everything till our throats hurt and it was a lot of fun!

Chester’s energy on stage and in studio is what got us all so hyped about it, so a bunch of punk kids with ADHD, wanting to rock it out, gravitating towards them was pretty obvious.

Chester and Park were also about change, they never struck to the punk sound all the time, they went from screamo to hard rock to filling in electronics for the first time in their album ‘A Thousand Suns’ to ever changing until their last album ‘One More Light’

I suppose most 90s kids grew up on Chester’s lyrics and music, and it all gets a little too nostalgic, going back and living the small moments in life and maybe that’s why we’re a little too unhappy with the news that he’s gone.

I wish I could write an ode to Chester, but I’m no poet, but I’ll drop in a Youtube link to a song I love, so you get what I’m talking about

https://www.youtube.com/watch?v=wsqKH_VIrng – Bleed it out, Live at Milton Keyes. 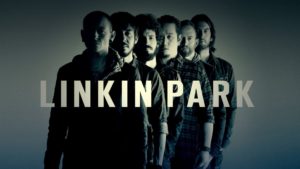 But what I’d also like to say is that Chester took his life. He struggled with alcoholism and drug abuse throughout his life, he was depressed.

Depression is something that should be addressed to everyone across, it is being trapped in your head and not be able to speak it out, which isn’t a good feeling at all, and also if you or anyone you know is going through depression then you should talk to friends and family and if you feel that isn’t working out then go ahead to a consultant and speak to them about it, do not search on the internet for anything related to this cause it really won’t help, it shouldn’t be dealt with the way he did, that isn’t nice at all.

Linkin Park doesn’t do too many shows and they hardly do any outside of US, but they were on my bucket list, I suppose I got to drop one out.

‘What I’ve done’, ‘Bleed it out’ and ‘Iridescent’ are my favourite songs from Linkin Park, what are yours?

Chester wrote in the song ‘In the end’ that…

“In the end, it doesn’t even matter”

Well, he got that wrong…it does.

Good Goodbye to you Chester, Rest in Peace.

“Propaganda” in present-day English, refers to information or media (especially of biased or misleading nature) that is used to manipulate the audience to further an agenda. If you hear the word propaganda, it immediately alerts you to look out for... END_OF_DOCUMENT_TOKEN_TO_BE_REPLACED

Many of us might look back at the time we spent in school with nostalgia and fond memories. But most will also agree that it wasn't the happiest of places with long and monitored study hours, heavy bags full of... END_OF_DOCUMENT_TOKEN_TO_BE_REPLACED

The lockdown, for most of you, was the most boring time of my life. Six months of staying at home didn't do me any good apart from the fact that it brought me and my dad closer by giving us... END_OF_DOCUMENT_TOKEN_TO_BE_REPLACED

Two things have always fascinated me as a child- words and crosswords. Which word should I say? How do I say it? Can it, in its barely ten letters, hardly three syllables, carry the whole meaning of what I want... END_OF_DOCUMENT_TOKEN_TO_BE_REPLACED

Ayrton Senna. A man whose legacy lives on to this day. Most modern-day drivers look up to him. He has won 41 Grand Prix in 162 races, has been on the podium 80 times, and has won the world drivers championship... END_OF_DOCUMENT_TOKEN_TO_BE_REPLACED