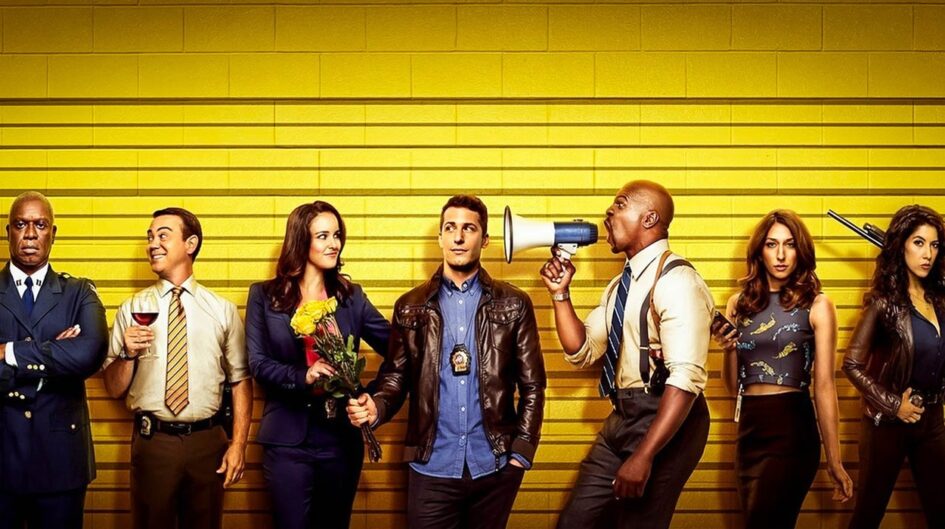 Amy walks over to the board and adds one point under the name Jake. That’s where it all started; a bet between the two of them on who is the better detective and now, it has come to them having a baby in the precinct. Through all of this, the show Brooklyn 99 has never failed to put a smile on our faces.

This is a show about the lives of the detectives at the 99th precinct, NYPD and narrates what they do best, bust bad guys.

On 17th September 2013 the first episode, “Pilot” aired on Fox and that is when it hit the road. However, my journey with it started on one afternoon when I had nothing better to do. A show called Brooklyn 99 was airing on Comedy Central and I only needed one episode to know exactly what I was going to do next.

As I watched each season, I experienced the characters grow as people and I grew along. It eventually started to feel as if they were not just some characters from the show but real people; they were my ‘fun-to-watch neighbours’.

The last season of this show started airing on 12th August 2021 in the United Kingdom. As much as I don’t want this show to end, I wish I was in the UK to watch it. Just a few years ago, I was just a bored kid in front of a T.V and now here I am(still bored) writing an article about one of my favourite shows. It just got me thinking how quickly things tend to change and how my beloved characters grew with each episode too.

The captain is arguably the best character of the show. My earliest memory of the captain is him walking in on Jake imitating a robot and telling Amy that the new captain would be a washed-up pencil pusher. And as the camera reveals the captain, it is evident that Jake was right. We see a stern, cold and poised man standing behind him, who introduces himself as their new C.O., Raymond Holt.

Detectives Jake Peralta and Amy Santiago are the two best detectives on the squad. When I started watching the show, it was evident that Jake was cocky and immature. He did not follow any rules. He liked to work on his terms and catch the bad guys. Amy on the other hand was a perfectionist. She followed every rule in the book and was very organized. Both of them looked for something in their captain. Jake wanted a captain who would let him do whatever he wanted and Amy was looking for a rabbi and mentor.  We see both of them struggle to get the captain’s approval. It was just that Jake wanted to get him off his back and Amy was trying to impress him.

Amidst all this, we see that Brooklyn 99 is not all giggles like it is conveyed to be. Not all characters end up like Jake and Amy, and we can see this through the shows first unrequited love between our two beloved detectives Charles Boyle and Rosa Diaz.

As Charles does everything he can to impress Rosa we can see that they are as contrasting as they come. Charles is showcased as a very emotional and open book type of person. He is not as gifted as the other detectives but he works the hardest to keep up with his peers. Charles is more than just a character. Well, he is our stereotypical Brooklyn-99 fanboi. He loves Jake the most and is the biggest supporter of the “Peraltiago” (Jake-Amy) ship. Detective Diaz, on the other hand, is the badass of the group. She takes pride in the fact that no one knows more than 3 things about her and is extremely scary. There was no doubt why these both wouldn’t work.

But as seasons pass, each character grows in their respective way. Charles gets over Rosa, who has now come out to be bisexual and a lot less scary than she was before. He falls in love with Genevieve, a prisoner during a case. He proves she is innocent and frees her from prison. They adopt a son together, Nikolaj in season 7. He becomes a great father and husband. However, one thing that doesn’t change is that he is as big a fanboy as he was in season 1.

Even though Jake and Amy are the official main characters of the show, Norm Scully and Michael Hitchcock are the two characters of the show we all can relate to. They are the unofficial favourite duo, the clueless duo. We see in one episode that they were amazing detectives in their prime but now they are used to their desk jobs, being clumsy and eating food all day. They have been best friends and partners for 20 years and are that two dumb friends who we love to be around.

Oh, I don’t dare forget our Gina Linetti. She is the precinct’s sardonic civilian administrator but only did little more than play on her phone, taunt Charles, flirt with Terry and compliment herself. And, Sergeant Terry Jeffords who was almost as much a dad figure to the squad as Capt. Holt. Through the seasons, we see both of them prove over and over that they would do anything to keep the people of the precinct safe and happy. After Terry’s twins were born, he stuck to desk work and was scared of being hurt, nevertheless he saved the captain’s life twice and showed that he could be counted on. Even Gina was always there for everyone, obviously only after gloating about how awesome she is. These two characters held the precinct together in their own ways.

When the captain was assigned the precinct, his main aim was to make the precinct better than it already was, the best.

As the show advances, we see both Jake and Amy get their act together. We see Jake behaving like a rebellious teen in the first few seasons. As we grow up, he grows up too; and that’s what makes him one of the most loved characters on the show. He becomes a better partner, friend and detective. As we see Amy fall in love with Jake. We see her becoming more laid back. She is now okay with (kind of) breaking a few rules and has fun along with Jake. They help each other become better people and were there for each other always and thus the Peraltiago ship became the best ship that sailed out of Brooklyn 99.

We are shown that along with the other characters, their captain also goes from being a “washed-up pencil pusher” to someone who has earned their love and respect. It becomes clear as the show progresses and we get to know more about the captain, that his cold exterior was just a façade he maintains at work because of everything he went through to reach this position being a black gay cop.

Nevertheless, not everything needs to change. Some things are perfect the way they are. No, I am not talking about Hitchcock and Scully. I am talking about the massive respect the squad has for their captain. They always held him in the highest regard and that did not change a bit through the show.

What makes this show one of the greatest sitcoms of our generation is that it has a perfect blend of emotions, drama, witty comebacks and humour. Every character has their own story and personality. The growth of each character, the way they are all carefully written, makes this show cool. B99 has shown us that change is good and we as fans will always hold it very close to our hearts. Nine-Nine!

The lockdown, for most of you, was the most boring time of my life. Six months of staying at home didn't do me any good apart from the fact that it brought me and my dad closer by giving us... END_OF_DOCUMENT_TOKEN_TO_BE_REPLACED

Two things have always fascinated me as a child- words and crosswords. Which word should I say? How do I say it? Can it, in its barely ten letters, hardly three syllables, carry the whole meaning of what I want... END_OF_DOCUMENT_TOKEN_TO_BE_REPLACED

Ayrton Senna. A man whose legacy lives on to this day. Most modern-day drivers look up to him. He has won 41 Grand Prix in 162 races, has been on the podium 80 times, and has won the world drivers championship... END_OF_DOCUMENT_TOKEN_TO_BE_REPLACED

Many of us might look back at the time we spent in school with nostalgia and fond memories. But most will also agree that it wasn't the happiest of places with long and monitored study hours, heavy bags full of... END_OF_DOCUMENT_TOKEN_TO_BE_REPLACED

It feels like just a week ago when the internet was bombarded with memes of Will Smith slapping Chris Rock at the 2022 Oscars. Ah, what a moment. The Cannes Film Festival too ended just recently, leaving us waiting for... END_OF_DOCUMENT_TOKEN_TO_BE_REPLACED