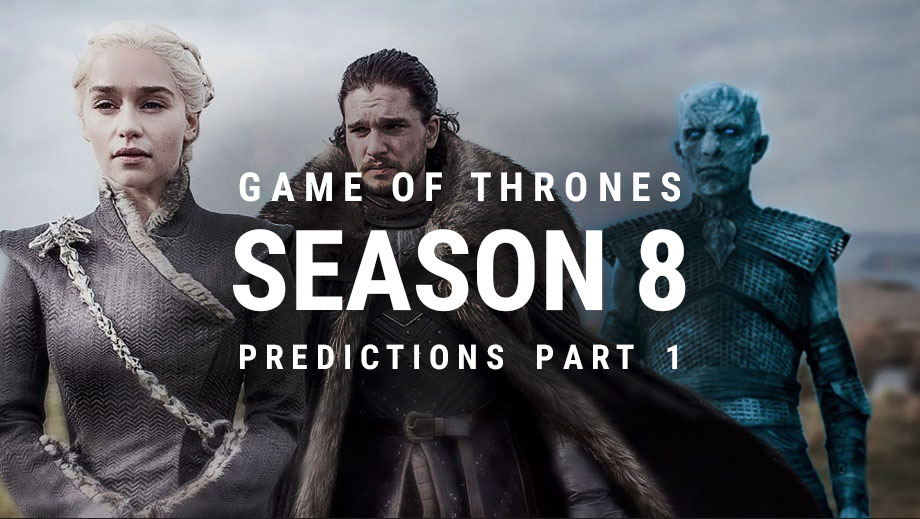 It’s predictions time! With Game of Thrones season 7 wrapping up in a spectacular way, one can only wonder what is going to happen in the next season. To help you give a rough idea, I have done some analysis and arrived with interesting speculations about the next season. Mind you, this article will be filled with spoilers from all the seasons so far and possibly season 8. 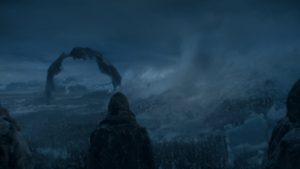 Let’s start with where we were left off in the previous season. We saw the Night King destroy The Wall and go south along with the undead army. But wait, he can do all of that with his dragon alone, yet he lets other White Walkers reach The Wall first, which must’ve taken days. We can see the undead dragon’s torn skin and wings. The dragon, I presume, is rotting, although, the Night King decides to wait for all the wights to arrive which means that he doesn’t want to do it alone. This gave Dany, Jon, and others enough time to return south with the captured wight and arrange a meeting with the Crown. Does this mean that the Night King will use the dragon only when it is needed the most? So what I think is… He will again wait for other walkers to travel to some really deserted area somewhere between The Wall and Winterfell  (near Last Hearth?) because he wouldn’t conquer a town by himself, it is not his style. By the time the wights reach this place, it will be transformed with snow everywhere. The walkers decide to split and conquer other castles and acquire more dead men. So now Winterfell has fewer immediate enemies. We will see a montage of burning castles and dead men attacking various northern houses including Meera’s. Another castle we will see getting destroyed is Castle Black. The gates of the Castle Black will be opened by one of the walkers to reveal more wights on the other side of the gate, waiting to enter. 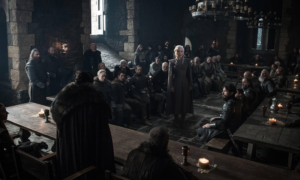 The showrunners wouldn’t want to waste their time on characters traveling. So we quickly see Jon and Dany arrive at Winterfell where they were heading in the last episode. The huge Stark reunion happens. Jon, Dany, Sansa and the others in Winterfell set up a meeting to discuss the allegiance to Daenerys and the plan to fight for the great war. This council at Winterfell is crucial. At one side, King in the North Jon has bent the knee to a foreigner, on the other hand, the news of The Wall getting destroyed. I don’t think Jon’s parentage reveal becomes a part of this council as they already have a huge white walker threat to talk about. It might probably happen in a private meeting between the Stark kids. Dany, as usual, speaks strongly at the meeting, Jon supports her. Their relationship is evident. So what is the deal with Jon and Dany? Do they love each other? No. Do they wanna marry and make babies? Maybe yes. The ultimate purpose of their relationship is to create a successor to the bloodline of Targaryen, a pure Targaryen. The alliance makes perfect sense. But this may create friction among the counselors at Winterfell because they told Jon not to trust a foreigner, yet, he comes back saying – Here’s your new queen. Things will go beyond anyone’s control. But then again, the army of the dead is just a few kilometers away. As the council continues, we will see the camera zooming out and far to reveal the wights. Winterfell is about to be stormed. 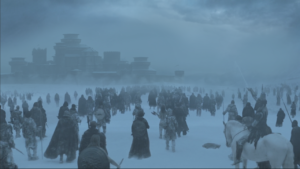 While everyone is busy in the great hall of Winterfell including Bran, a part of the dead army marches towards them. The guards identify wights in a distance and immediately raise the alarm. The council stops abruptly, every soldier gets into their position, the attack begins. Arya shows her skills, she jumps and rolls and runs killing those wights like a ninja. Sansa feels way too many emotions. She locks herself up in her parents’ room along with Bran. Dany will summon her dragons while trying to remain in safety. Finally, the starks and soldiers will fight and defeat the dead along with the help of two dragons. This is where we will see Jon trying to mount on Rhaegal for the first time, foreshadowing their bond in the eventual battle. After burning the dead bodies, the lords of Vale at Winterfell would suggest that Winterfell is no longer safe, the Night King may come at any time. The people who cannot fight the wights should reside at their home – the Eyrie, which is impossible for wights to attack. Before the unsullied arrive, Winterfell has already seen the flavor of the Great War.

That’s the end of part 1 of my predictions. More to follow in part 2. What do you think about it so far? Let me know in the comments below.

Note: The above two pictures are photoshopped.

Many of us might look back at the time we spent in school with nostalgia and fond memories. But most will also agree that it wasn't the happiest of places with long and monitored study hours, heavy bags full of... END_OF_DOCUMENT_TOKEN_TO_BE_REPLACED

The scene opens in a jury room, where a decision is to be taken on the death sentence of a man accused of murder. After voting, each juror explains why they feel the accused is guilty or not guilty. One... END_OF_DOCUMENT_TOKEN_TO_BE_REPLACED

“Propaganda” in present-day English, refers to information or media (especially of biased or misleading nature) that is used to manipulate the audience to further an agenda. If you hear the word propaganda, it immediately alerts you to look out for... END_OF_DOCUMENT_TOKEN_TO_BE_REPLACED

Ayrton Senna. A man whose legacy lives on to this day. Most modern-day drivers look up to him. He has won 41 Grand Prix in 162 races, has been on the podium 80 times, and has won the world drivers championship... END_OF_DOCUMENT_TOKEN_TO_BE_REPLACED

Faith has always been considered as one of the most inherently pure and pious things, across any and every religion and every school of a belief system based on the concept of God. That is probably because every single one... END_OF_DOCUMENT_TOKEN_TO_BE_REPLACED