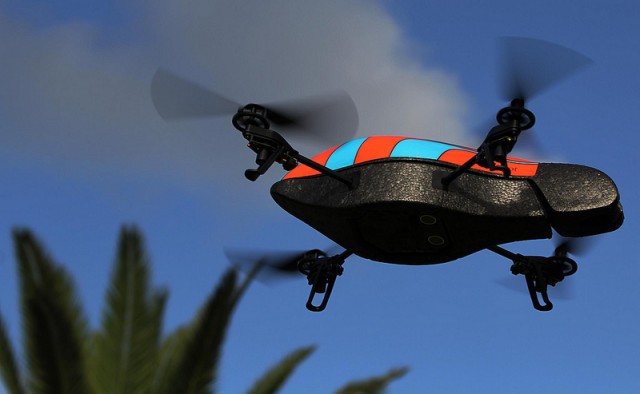 Drones , Quad-copters  or   Unmanned Aerial Vehicles (UAV) are the machines of new era. They are the most advanced equipment in Robotics, Aeronautics and Electronics. Basically drones are multi-rotor copter with four arms, each of which have a motor and a propeller at their ends. Quad-copters are similar to helicopters in some ways, but the lift comes from four propellers, rather than just one. In a drone two propellers spin in clockwise and the other two spin counter clockwise and this enables the machine to hover in stable formation. Drones are the leading tech which is changing the world and making things easier.

A drone works in the following way where the different orientation of spins work in a drone which helps in the lift of a drone.The image shows the different direction in which the propellers spin.

How many types of drones are there ?

Basically  drones are of many types :

The consumer type encompass the “tech toy” category, as well as what we might regard as “starter” hobby aircraft. They are compact and small sized compared to other types. While many have cameras, these cameras are primarily for showing off to friends. They lack stabilization and are not suitable for most dedicated photo or video use. But they have a fun features and  gimmicks such as one-button flips etc.

We have the option to modify the body by using 3D printers which would add more functionality when it’s in the air and here are few 3D printed drones.

These are specifically designed for video and photography. The most common implementation is to combine a Go-pro hero or similar action camera with a 2 or 3 axis for stability. I would put these in the “prosumer” category, as some user may be enthusiasts looking for more than what the entry level offers, while others may be shooters who are primarily into capturing great images.

And here is a prosumer drone

Professional drones will include most hexa-rotor and virtual all octo-rotors and up. These are designed specifically to carry payloads, such as cameras. These type of drones are mostly used by professional photographers and a few film makers who wants a high quality video or photos and these drones are very big as much as a half human and weigh lot more than other types and even are costly but in this type of drones we have an option  where we can change the camera of our choice which is a big advantage to a professional photographer.

And here is a professional drone

Drones are been used by Amazon. Late in 2013, Amazon announced a plan to use drones for delivery in not-too-distant future, and now it’s done by a service called “Amazon Prime Air”. Amazon Prime Air is a future service that will deliver packages up to five pounds in 30 minutes or less using small drones. Flying under 400 feet and weighing less than 55 pounds. Prime Air vehicles will take advantage of sophisticated “sense and avoid anything which comes in it’s way to delivery” technology, as well as high degree of automation, to safely operate beyond the line of sight to distance of 10 miles or more.