Do The Dead Dream? 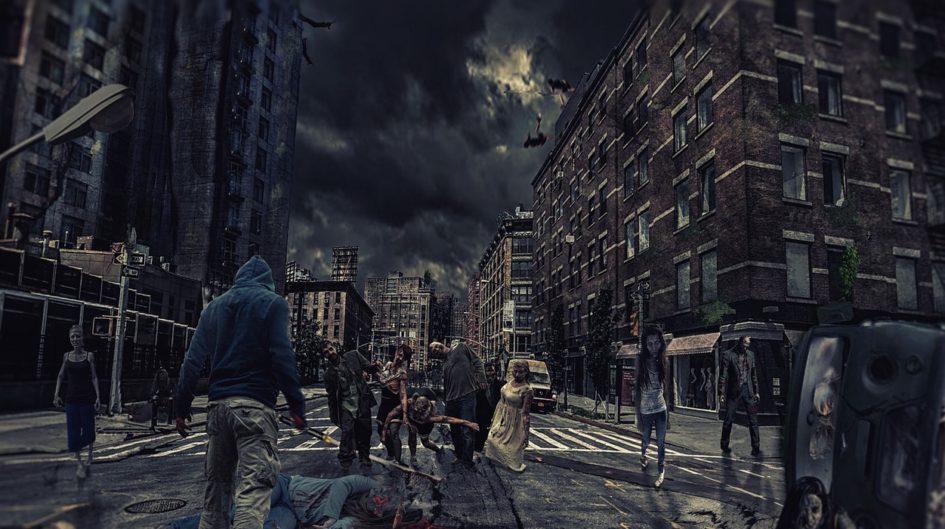 A month ago,  humans almost ceased to exist. A virus, whose origin is still unknown, spread through the world killing people. The trouble was, they didn’t stay dead. The infection re-animated their bodies and converted them into deadly creatures that only knew how to eat. One of those creatures bite you, you’re either dead, or you’d turn into one of them.

I let out a sigh of frustration as I drive through the ruined streets trying to find a store that wasn’t completely
destroyed. When I finally see one, I slowly park the car and step out.

It was night already. My heightened senses allowed me to see clearly and my vision took on a slightly redder
hue. I felt the heat rise in my veins as my instincts rose a bit higher.

I see a few zombies aimlessly walking around. One of them sniffs in the air and turns towards me.

I tackle the zombie and slammed its head against the ground. Hearing its skull crack, I quickly moved away, then looked up to see another one coming for me. I quickly got up and plunged my knife into its decaying skull. But that was my limit. Not having enough patience to fight all of them, I collapsed on the ground under the zombie. The corpse helped me disguise my scent as I held my knife in a tight grip within my bloodied hand, ready to strike.

Unable to sense me, the zombies staggered away. Waiting for the last one to pass, shuddering with disgust, I shoved the corpse off me. I’d kill for a shower. Literally.

I enter the store and try to fit as many supplies as I could into my backpack. As I walk down the aisle, my mind drifts back to the night that changed my whole life.

I place my basket on the billing counter.

Just as I’m about to pull the credit card out of my purse, a few people suddenly barge into the store.

When I look behind them through the glass doors of the entrance, the first thing I notice absolute chaos all over the streets.

I go out to see what was happening. Out of nowhere, an ambulance whizzed past me with its sirens blaring and tires squealing. People dashed out of their cars in panic and they seemed to be running away from something. Screams and painful cries echoed from every direction. Before I could process what was going on, a massive explosion at a distance causes an electricity blackout. The only thing that helped with my vision was the light from the vehicles.

A guy slowly comes into view. Panic punched a hole through me and a blaring alarm set off in my head when I saw his inhuman grayish white eyes without any pupils, veins protruding from his neck stood out against his pale skin. And as though that wasn’t enough to frighten me, he was chewing on what looked like a human hand while making animalistic growls.

My body refuses to move as my brain continues to process all of this.

He slowly started limping towards me. That’s when I come back to my senses and my legs decide to
work.

As soon as I run onto the streets, it all happens in slow motion. A woman tackles a man,  seemingly infected with whatever the previous guy had. She bites into his flesh with her teeth. His muffled screams soon stopped and new screams of people who witnessed the attack erupted and they scrambled to get away.

As I looked around and took in the sight, it all seemed like a deadly crime spree with no end. That’s when everything started making sense and realization hit me.

In a complete state of panic and dread, I manage to trip on something and collapse on the ground.

I looked up to find myself a few meters away from a zombie shuffling towards me. His right arm dangling loosely, almost broken. His ankle twisted weirdly, but he’s walking on it anyway, oblivious to any pain he might be in.

The terror in me shoots so high that I have no control over my body as I crawl backward, miserably failing
to get up. I see a few people looking in my way trying to soak in the scene in front of them. But none of them came to help.

With my hopes of surviving crashing down, I mentally prepare myself to die. Just as the zombie lunged at me, a bullet shot through its skull from behind. But it was already too late because I feel a sharp pain of teeth sinking into my shoulder. My head hits the pavement hard and a burning sensation fills my lungs when I realize I’ll probably never see my friends and family.

A wave of nausea swept over me. Black dots fill my vision and I completely lose my consciousness.

Now, my fingers graze the scar on my shoulder. It turns out, the virus didn’t kill me but ever since I woke up to a deserted street, after I blacked out, I didn’t have any superpowers, but my senses seemed to have heightened.

I had so many unanswered questions. My only source of information about the outbreak was through the radio. Wherever I went, I looked through every government facility to check for survivors, but I couldn’t find any.

After collecting the required supplies, I get into my car and drive towards the house that I’ve taken refuge in for the past three weeks. I make sure to lock all the doors and I fall onto my bed.

I had so many unanswered questions. For all I knew I could be dead. Everything since the bite seems make-believe. Like I’m stuck in that moment of pain or dreaming things I could’ve been.

But then the dead don’t dream,

A few minutes before the alarm goes off at 4 am The birds are still asleep in their nests as I stare at the digital alarm clock, waiting for it to ring. One could say that I might be classified... END_OF_DOCUMENT_TOKEN_TO_BE_REPLACED

The ways to stay safe during this pandemic have been changing from time to time. In the beginning, we believed social distancing was the only way to stop the spread of the deadly virus. But now, we have slowly started... END_OF_DOCUMENT_TOKEN_TO_BE_REPLACED

“ Rani, c’mon, let’s get back to moving ”, her mom woke her up in a hurry. “ Please ma, just five more minutes “, replied Rani, reluctant to open her eyes as she could barely rest for an hour.... END_OF_DOCUMENT_TOKEN_TO_BE_REPLACED

Now, before you prepare yourself to yawn and look down upon this article as an obsolete one, let me remind you that one of these shows has surpassed Game of Thrones’ viewership records. So brace yourself to travel thousands of... END_OF_DOCUMENT_TOKEN_TO_BE_REPLACED