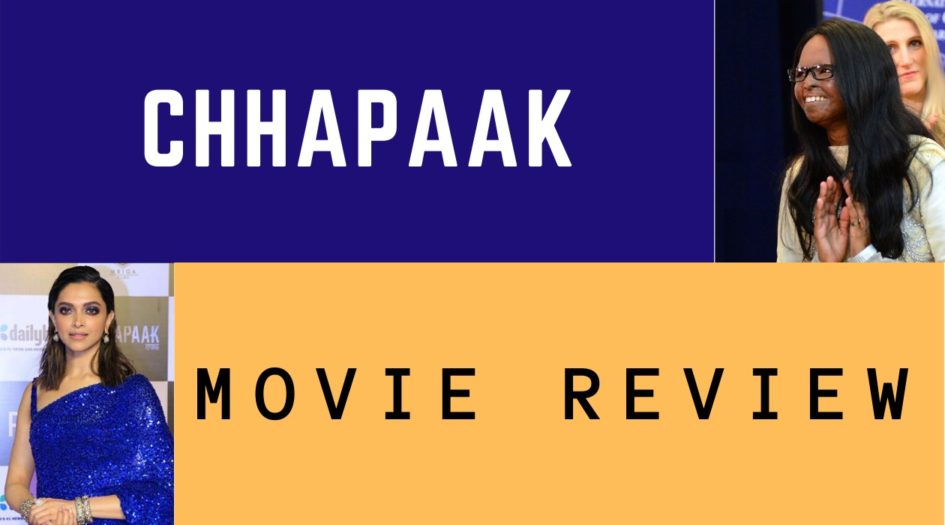 A strong message-oriented story closely related to intense real-life incidents is something we’ve come to expect from Meghna Gulzar’s movies from recent years. And here she’s with yet another bold attempt ‘Chhapaak’. The Deepika Padukone – starrer released on the 10th of this month alongside commercial movies like Tanhaji. Yet the movie gained the admiration of the public. The movie revolves around the fifteen-year-old story of the acid attack against Laxmi Agarwal. This case, to date, is one of the most sensitive cases of crimes against women.

The movie surprisingly starts on a very light note with Malti, the character played by Deepika, being portrayed as a happy woman on trials to find herself a job.

As the movie proceeds, Malti finds herself a job at an NGO which supports acid attack victims and which is when the movie steps into the sensitive zone as it goes back to the days of her case and how she tackles all the obstacles with the help of a female lawyer.

In spite of being a very strong script, the narration and screenplay at times dilute the essence of the scenes. But the soul of the movie is carried by the brilliant performance of Deepika.

Though other actors like Vikrant Massey and Madhurjeet have done justice to their roles and delivered notable performances, Deepika’s presence on the screen steals the stage. The gems of the movie have to be the few scenes wherein Malti looks at her face after the attack and her scream pricks the hearts of the audience.

From hiding her face from the public even for an interview to jumping in joy outside court for being able to win the battle of trying to ban the sale of acid, after more than five years of struggle, everything Malti’s character did was to connect with the audience on the grounds of love.

The music does what is expected and needed for the movie and songs like Nok-Jok and the title-track stand out with extraordinary lyrics adding depth to the scenes.

It takes some heart for someone to portray such a strong character that too just after topping the list of the most beautiful women in the world. Deepika just doesn’t play the character but gets into the skin of the victim and steals the show. Being able to deliver a performance of that calibre with such huge make-up on is something she must be applauded for.

Meghna Gulzar’s direction and Deepika’s outstanding performance have together created one of the most strong and sensitive yet beautiful movies of recent times. This movie is a very brave attempt to throw light on the current system and usual victim-shaming nature of the society. On its first day of release, being a non-commercial movie, it strived to gain the focus of the audience. But at the end of the day, Chhappak is one such movie that’s worth much more than only reviews.

David wakes up to find everything unusual. The glittering sun rays that spread various hues of shine are not silver or gold, the grass is not green, the sky is not blue. Everything in sight is anomalistic to him. In... END_OF_DOCUMENT_TOKEN_TO_BE_REPLACED

Note: This is a satire and is only meant to be conveyed humorously. It is to be taken lightly and is not intended to oppose, demean or insult anyone. Traffic in India can be interpreted as a “flowing river”. A... END_OF_DOCUMENT_TOKEN_TO_BE_REPLACED

Lip, dip, paint. Grace Fryer was 18 years old when she first heard these words – eager, ambitious and ready to take on the world. She was employed as a dial painter with Radium Luminous Materials Corporation. Six years later,... END_OF_DOCUMENT_TOKEN_TO_BE_REPLACED

7th March 2020, for anyone, might seem like just any other day but not for us KMITians. The most anticipated event of our college, the KMIT evening, was held on the 7th. A beach day with friends can never go... END_OF_DOCUMENT_TOKEN_TO_BE_REPLACED