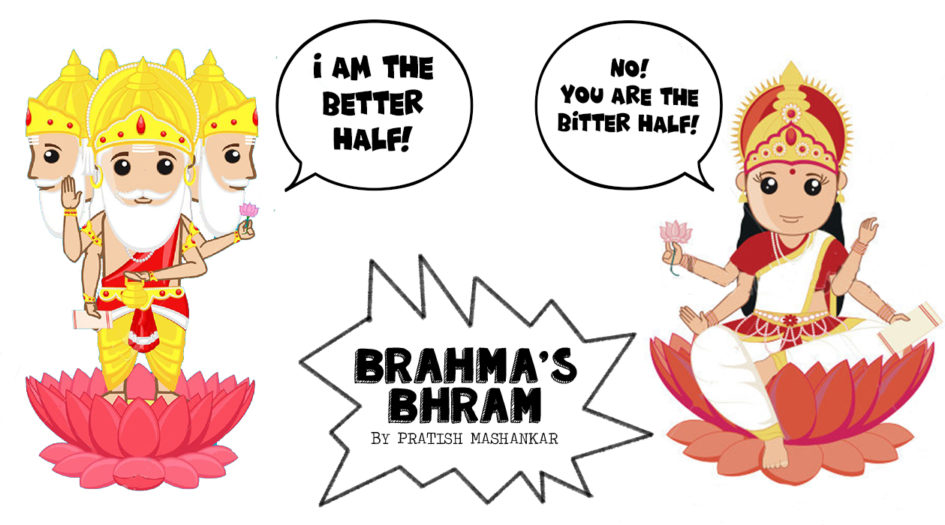 I stand on the shore with you, dear reader, as a wave approaches us. We anticipate its arrival, while our feet are buried deep in the warmth of wet sand. We see the horizon as well, where the sun meets the ocean, but, before setting, it casts an amalgam of red, orange and yellow in the high heavens.

What we just observed was a minuscule blend of beauties around us. This world that we, the ‘Purush’ see, is ‘Prakriti’. Prakriti is the unbound, untamed Goddess who nurtures her children. The Purush, unaware of her power, try to domesticate and dominate her and hence brings upon himself, her wrath through unforseen natural calamities.

What drives our emotions to experience this beauty, is ‘desire’. Vishnu desired, and Brahma sprouted from his navel. Brahma desired, and the world came into existence.

In a conversation between Manu and Lord Matsya, the fish incarnation of Vishnu, Manu asks, “How did Brahma fall prey to the desire of acquiring his daughter for a wife?” Manu’s curiosity seems valid when viewed from a rational perspective and man-made laws. Because of them, we, in an attempt to obtain a better view of the lives around us, establish a society which believes in acceptance but ends up rejecting the ones who fail to fit the criteria. 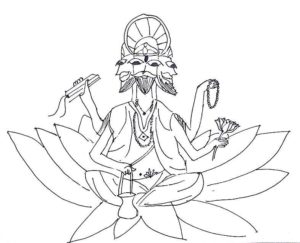 “After being assigned the task of creation by Vishnu, Brahma started the fabrication of the worlds. He initially created the four Sanata Kumars and ten Manas-putras and asked them to procreate. While the former four refused to indulge in the act, the latter ten claimed that they were unaware of where to begin.

Looking at his creation, Brahma understood that what he saw around him lacked saundarya, madhurya and laya (beauty, melody, ordered movement). So, he created Kama, the Lord of desire and gifted him the five arrows which shall ignite the five senses.

Then, he split himself into two and from his other half, was born Saraswati. She bowed down to her father and paid him her respects, by circumambulating around him. During which, kama, to test his powers shot the five arrows towards Brahma. Brahma thus succumbed to his senses, grew four heads to look at Saraswati as she continued circumambulating him. Saraswati, aghast by this, tried to escape Brahma’s glances by taking numerous forms, sometimes a cow and sometimes a doe, even as a tigress, a mare, a hen, a lioness and so on (hence the name Shatarupa- the one with many forms). While Brahma, to capture her, took the form of their male counterparts: the bull, deer, tiger, horse, rooster, lion, thus procreating the many species.

Troubled by his gaze, Saraswati rose above him, and Brahma, unyielding, grew yet another head on top his four existing ones. Witnessing this sight, Mahadeva Shiva, lifted his trident and hurled it towards Brahma, beheading his fifth head. Shiva then took the severed head and used it as his begging bowl (hence the name Kapalika). Having understood the crimes he committed, Brahma apologized to Saraswati and Shiva” 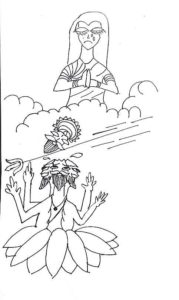 From saundarya (beauty) rose lobha (desire). From lobha rose mada (ego), the fifth head of Brahma, unable to withdraw gaze from Prakriti. Brahma’s quest to obtain this Prakriti through Shatarupa brings in hinsa (violence) severing his head personified as his ego.

Brahma governs the manas (mind) and hence his sons and their descendants (humans) inherit his traits and become Manavas. They participate with Prakriti through the five jnanendriyas (eyes, ears, nose, tongue, skin) and the five karmendriyas (mouth, hands, legs, genitals, seat). But, despite having the manas, Brahma doesn’t possess the mimamsa. ‘Mimamsa’ is the profound thought which guides and reflects into the inner self. Due to the absence of mimamsa, Kama (desire) succeeds in shooting his five arrows towards him, Saraswati (knowledge) leaves his side and aham (ego) overpowers his mind like the fifth head.

‘Saras’ means to flow and from saras, comes Saraswati, the energy which flows within and without the cosmos. Brahma’s inability to understand mimamsa, led to his desire of capturing of Saraswati. Little did he know, that, Saraswati is the embodiment of Prakriti and hence Shakti, the indiscriminate power binding all the objects, pre and post their existence. It was because of her that Brahma could create and procreate, but, all Brahma saw was another object of desire.

His short-sighted consciousness made him consider himself as superior and regard dominance as his duty, which sprouted his ego. Such clouds of ignorance eclipsed his thoughts, and Saraswati, the Goddess of thought-processing, embarked on her duty to purify his manas. She caused the events to flow like a river and made it reach the ocean of realisation. Shiva, hence became the instrument to cause this, and thus, the beheaded Brahma, from his four remaining heads recited the supreme knowledge of Brahmanda- Veda.

Veda filled the ultimate reality through Vak (speech) through Vaag-devi -the Goddess of Speech (Saraswati). The saras knowledge, became the saara (essence) of swa (self). Saraswati helped Brahma realise the self and rise from his animal tendencies. She transcended his knowledge from material reality to spiritual existence. Because of her, Brahma was no longer surrounded by bhram (illusion) but attained brahm-gyan (knowledge of the Divine). In the true sense, she became his Ardhangini, his better half.

In this augmented reality, there exists a Brahma within each of us. Struggling to find a meaning out of the society’s complex notions. We fight, we dominate, we live, we die yet somehow, we survive. The Brahma in us, creates a living-corpse, merely responding to the beautiful stimulus experienced by the senses. Even today, Saraswati, while playing her Veena, looks at us and smiles, waiting for us to outgrow the Brahma, within, and embrace the Brahmani, without. 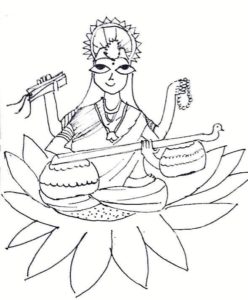 While great space giants like Elon Musk and Richard Branson are sweating blood to launch rockets for greater causes, this rural kid from India has managed to secretly launch himself to space with no authorization. There’s no way you know... END_OF_DOCUMENT_TOKEN_TO_BE_REPLACED

[TRIGGER WARNING] The following article portrays drug usage, bombings and death which is potentially distressing. It’s been a year since I have seen a ray of sunlight. I sometimes forget if I finished my meals because of the drugs I... END_OF_DOCUMENT_TOKEN_TO_BE_REPLACED

On 24th March 2020 at 8 PM, TV screens across India flickered in unison as the Indian government announced a 21-day nationwide lockdown as a preventive measure for the COVID-19 pandemic. This announcement caused a complete meltdown of economies worldwide.... END_OF_DOCUMENT_TOKEN_TO_BE_REPLACED

As you read this, picture yourself back in the 1970s. You would be getting ready to catch your college bus as golden rays light up your open veranda. Your grandpa would be strolling on the balcony reading the newspaper. Everyone... END_OF_DOCUMENT_TOKEN_TO_BE_REPLACED

Ping! Sound familiar?  That's the sound I woke up to every day, ever since I got my first mobile phone at thirteen. Of course, technology has come a long way. But at least I did not have to ask a... END_OF_DOCUMENT_TOKEN_TO_BE_REPLACED