A story with Jeffery Archer 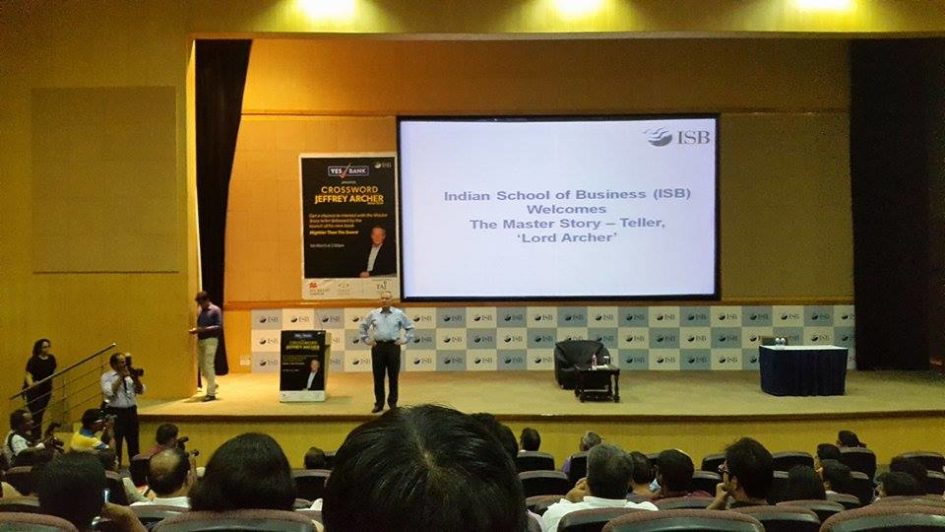 On the 5th of March, Nithya and I had the opportunity to be seated in the same hall as Jeffrey Archer “the master storyteller”. He was on a  five-day tour to India as a part of his promotional campaign for “Mightier than the sword”,  the fifth book in the “Clifton Chronicles” series.

Jeffery Archer, standing tall and mighty at the age of 74 years adorned the hall of Indian School of Business (ISB) campus in Hyderabad. The auditorium was thronged with eager minds waiting to hear their idol, Lord Archer, himself, who was the keynote speaker for today’s gathering. Jeffrey Archer ambled across the podium jauntily with moderately paced strides while we waited for him to begin his speech. He began, with narrating the story of his “rise to fame” which according to me aptly exemplifies the proverb, “failure is the stepping stone to success.”

Nothing prolix, his speech was no less than a “motivational” jargon, as I call it. His style of talking seemed slightly sardonic and rhetoric ; to the ones who just adore him no matter what, cheered for him relentlessly while the others responded in indifference, with a deferential smile as a mark of respect.

For the fans of “Clifton Chronicles”, he officially confirmed that the series is now going to go till seven books instead of the five books he had initially planned for. So that’s a great news divulged by Archer himself- didn’t really leave any room for doubt there, did he? Also, he made a special mention about one of his impending ideas which according to him is one of his best ideas in his career of writing! Generally, authors tend to be secretive about their books, novels etc. but here Archer being all candid, was a sight to watch!

One more highlight of his speech which was given a resounding applause was when he said “The only difference I have seen in India from the last time I visited, was the Indian women. They are strong, brilliant and no less than the men folks.” It was just the day before his speech the documentary, “India’s Daughter” released and the whole nation was burning in fury over the “atrocities”  against Indian women, and the minute Jeffrey alluded to the change in Indian women, the whole auditorium broke out in a euphony of applauds.

Later, he embarked on a Q and A session which lasted for a few minutes. Cliched questions poured in, nothing out of the box as such!

The event ended with him signing the copies of our books. I must tell you, his autograph is pretty weird, a series of cryptic symbols, remotely resembling his name. 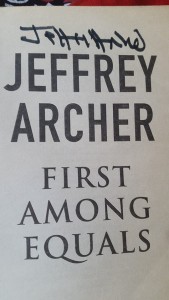 Overall a great event! The brevity of Jeffrey’s speech was the key factor of event. It was motivational and inspiring. As a take home “message”, I bought the book “False Impression” and got it signed by Archer. Looking forward to read the book and fall in love with his work all over again just like I did six years back when I got my hands on “Quiver full of arrows” and “Twist in the tale”.

Did your 8-year-old self ever wish for that awesome Pixar movie that you watched, and you watched, then you watched again, to be real? Because I did!  I had a dream. I wished I was a car so that I... END_OF_DOCUMENT_TOKEN_TO_BE_REPLACED

Ayrton Senna. A man whose legacy lives on to this day. Most modern-day drivers look up to him. He has won 41 Grand Prix in 162 races, has been on the podium 80 times, and has won the world drivers championship... END_OF_DOCUMENT_TOKEN_TO_BE_REPLACED

Two things have always fascinated me as a child- words and crosswords. Which word should I say? How do I say it? Can it, in its barely ten letters, hardly three syllables, carry the whole meaning of what I want... END_OF_DOCUMENT_TOKEN_TO_BE_REPLACED

It feels like just a week ago when the internet was bombarded with memes of Will Smith slapping Chris Rock at the 2022 Oscars. Ah, what a moment. The Cannes Film Festival too ended just recently, leaving us waiting for... END_OF_DOCUMENT_TOKEN_TO_BE_REPLACED