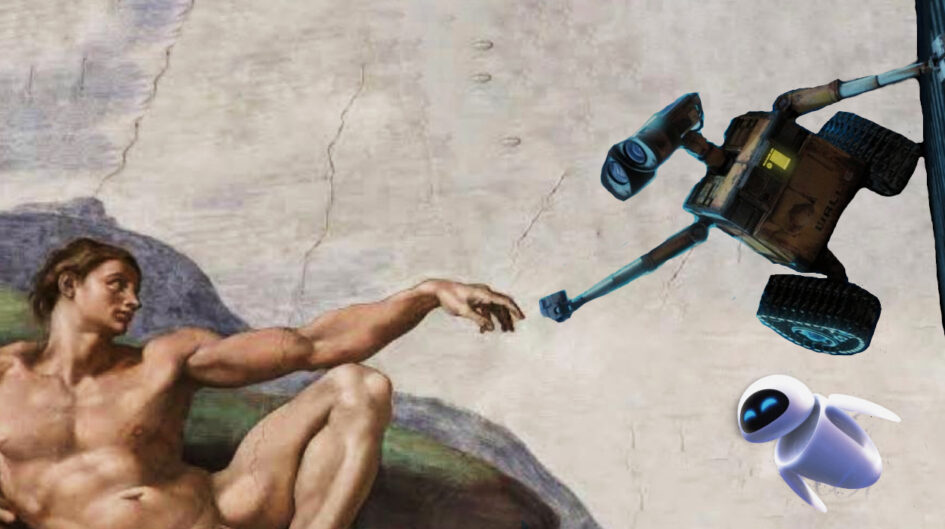 Did your 8-year-old self ever wish for that awesome Pixar movie that you watched, and you watched, then you watched again, to be real? Because I did!

I had a dream.

I wished I was a car so that I could race Mcqueen. Or, hiding one of my toys in the other part of the house so that if it woke up one day, it’d be so confusing. Or…. to be a trash-collecting robot named Wall-E.

Why Wall-E, you ask? He was so cute that everything alive on his planet loved him. And he played Minecraft all day! I mean what else would you call diligently stacking blocks to create trash builds. But two things that inspired my 8-year-old wits to dream of the world of Wall-E were – 1. Spaceships. 2. *SPOILER ALERT* Wall-E holds hands with his crush *gasps*.

Fast-forward to 2022, I was watching the movie recently. 14 years after the release of the film, I had an epiphany of a sort. Aren’t we living in a world almost similar to that of Wall-E’s? Overwhelming amounts of garbage- check, Earth dying- check, Big greedy corporations- check, people always on their screens- check, a rich guy trying to send us to space- check, tremendous amounts of advertisements everywhere- check. I am currently living my childhood dream! How cool is that?

Yay for both of us, me and you.

This was a dream from my childhood but it is we who are bringing it to being. Do you remember being taught in school – “Protect the Earth”, or reading – “Earth is the only home we have”? Didn’t bestie Elon (well he and I both like memes and anime) tell us that it was possible to colonize Mars? So why even bother caring about this planet which has been hosting life for millions of years? It’s become old. We need to get an update, to a bit… new-ish planet, one which hasn’t hosted any life, yet. Can’t harm life if there is no life.

Thank you for the garbage.

Every year, you, me, and everyone we know and don’t know dump around 2 billion tonnes of waste. A drop-dead gorgeous amount of this is because we dump a huge percentage of stuff we buy within half a year. That chocolate wrapper, the coke can or the clothes you thought were outdated, every step counts. Studies say that hopefully, we could even reach 3.4 billion tonnes by 2050.

Every day we are closer to the goal of building mounds of waste taller than skyscrapers. One day, I could go out, cosplay my Roomba as a Wall-E and get some cute pictures for my social media.

I thank the BnLs of our world.

It would be unfair if we don’t thank them. In fact, every product we buy or throw away is eventually influenced by big corporations. Apart from affecting pollution indirectly, only 100 investors and state-driven companies are directly responsible for around 3/4th of the greenhouse emissions. This is how much mega-corporations impact the world we live in.

I don’t just believe in climate change. I have complete faith in it. Climate change is not a theory but a fact. I am pretty much confident, that unless some villainous rascal with vile ambitions of a revolution to save Earth appears, you, me and our sweet BnLs will destroy Earth and I will get to live in space someday too.

Thank you for your trust.

A true BnL always sides with humanity, even if it meant breaching our privacy. How else are they going to provide us with the best advertisement experience? It is purely for the consumer’s good, giving us the freedom of the best choice.

Again, I thank you BnL.

Don’t you think you and I would become complacent if there were no BnLs in our world? We would just want to live here on Earth without thinking of alternatives. There would be no development in any of the fields of science. It’s not like we could still progress without the motivation given by the fact that we are slowly destroying Earth.

“Too much garbage in your face? There’s plenty of space out in space!” – A tagline from the BnL commercial is the peak of motivation.

Only when Earth becomes uninhabitable we will know both, true freedom and true progress.

We can always run away from our problems unless we are not poor of course.

There might be blocks and boulders on the path we walk on. There might be dogmatic people who claim an orbit around “co-existence with the environment”. But I have faith, in you and all our comrades who share my 8-year-old self’s dream. You and I won’t stop until we render land, water, and air worthless. We will fill them with irredeemable waste and toxic gases and chemicals. Then we will buy a ten-million-dollar business class ticket on the last spaceship for humanity, even if we had to sell our kidney, liver, heart or soul or even unused brain of ours, we will succeed.

Let’s hope that we meet onboard the spaceship owned by either my boy EM (that’s what I call Elon in the dm’s) or Uncle Jeff. When you grow into a fat blob due to the microgravity of space, just relaxing on the high-tech wheelchair and face timing the gang about the new flavor of the nutritional Slurpee you just had, that’s when you shall know victory.

Ayrton Senna. A man whose legacy lives on to this day. Most modern-day drivers look up to him. He has won 41 Grand Prix in 162 races, has been on the podium 80 times, and has won the world drivers championship... END_OF_DOCUMENT_TOKEN_TO_BE_REPLACED

It feels like just a week ago when the internet was bombarded with memes of Will Smith slapping Chris Rock at the 2022 Oscars. Ah, what a moment. The Cannes Film Festival too ended just recently, leaving us waiting for... END_OF_DOCUMENT_TOKEN_TO_BE_REPLACED

Many of us might look back at the time we spent in school with nostalgia and fond memories. But most will also agree that it wasn't the happiest of places with long and monitored study hours, heavy bags full of... END_OF_DOCUMENT_TOKEN_TO_BE_REPLACED